Larry Kirkman, dean of the American University School of Communication, appointed Everhart as interim managing editor. She joined Current in 1992 and covered public TV for 16 years before moving to the public radio beat in 2007.

The school, with support from the Wyncote Foundation, took responsibility for publishing Current a year ago. 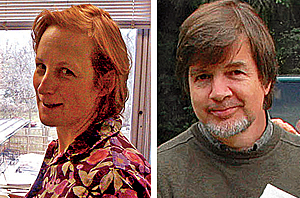 Everhart, left, and Behrens worked together for 20 of Current’s 32 years.

Behrens, 63, gave notice last fall that he’d retire from the position in six months. Before leaving the premises, he will coordinate the relaunch of Current.org this spring, at long last, using WordPress as a content management system.

“Steve and Karen have created an important professional publication for the community of public media,” Dean Kirkman said. “We’re proud to provide a home for independent and in-depth coverage of public media — both the broadcast system and the many new lifeforms of nonprofit public-service media that are developing around the country.”

Mike Janssen, who covered radio for seven years and has remained a contributing editor, and other freelancers will step up their work while Current hires a successor to Jeff Kaye, who unexpectedly died of a heart attack Feb. 11 after his third issue with the paper.

“Steve’s editorial vision for Current has shaped my reporting in profound ways,” Everhart said, “and I’m deeply grateful and humbled by this opportunity to adapt it for a new world of online news publishing.”

“Steve’s emphasis on reporting the news with context and analysis, his rigorous editing, and his deep understanding of the mission and history of public broadcasting set unique standards for Current among media trade publications,” the new editor said. “Our challenge now is to translate those qualities to a publishing model with a more robust, dynamic web presence.”

“It’s been a blessing to work with Karen, Mike, Brooke Gladstone, Jackie Conciatore, Geneva Collins and other principled, well-motivated and talented journalists for all these years,” Behrens said.

“With public media as our subject, it’s been an honor to poke our noses into a field of such actual and potential importance, such frequent overachievement — and so much need for internal communication and understanding, where we’ve tried to help.”

Current published its first issue 32 years ago this month as a service of the National Association of Educational Broadcasters, a major forerunner of PBS and NPR. The late Jim Fellows, president of the association, hired Behrens to start a news publication for the field. When NAEB shut down two years later, a consortium of public TV stations led by New York’s WNET provided funding for Current to continue publishing under Fellows’ guidance. [Peters Willson, Fellows’ friend and executor, commented in a letter to the editors.]

After Behrens left for a magazine job in 1984, the paper was built into a largely self-sustaining, independent news source for the field by editors including J.J. Yore and Richard Barbieri. Behrens returned in 1991, hiring Everhart as senior editor in 1992 and cobbling together its website in 1995.

In 2009, when WNET decided it could no longer serve as the publication’s parent, Behrens found that philanthropist and longtime subscriber David Haas would consider assisting Current and that the American University School of Communication also was interested in discussing affiliation with the publication.

In 2010, Josh Nathan, v.p. and former general counsel of WNET, explored various options for Current and began talks to transfer Current to the AU School of Communication, whose dean, Larry Kirkman, has a longstanding interest in public media. Associate Dean Ed Beimfohr oversaw negotiations for the university and set up Current as a unit of the school.

The Wyncote Foundation, an active supporter of public media projects established by the Haas family of Philadelphia and chaired by David Haas, enabled Current’s transfer to American University in January 2011 and has assisted its ongoing operation during the recession. The foundation is supporting the forthcoming relaunch of Current.org.

Current nevertheless relied on its traditional revenue sources, advertising and subscription revenue, to cover 79 percent of its operating costs in 2011.