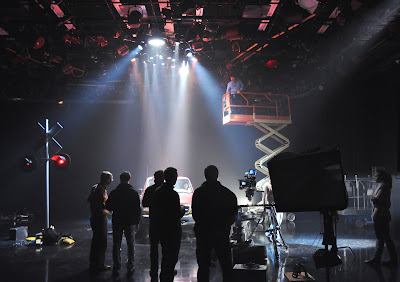 A unique new 30-second promo for 89.7 WGBH shows a radio tuned to the Boston station sucked out of a pickup truck by aliens, a la “Close Encounters of the Third Kind.”

The spot was the most complex ever produced by WGBH, its creators say, and involved driving a truck into the studio (above) and extensive use of computer-generated imagery in post-production to create the homage to the Steven Spielberg 1977 classic. It’s currently airing on WGBH 2 and WGBH 44 and the station is negotiating a cable media buy for the New England region to begin at the end of March.

The three-week production and two-day shoot brought to life 89.7’s new “Think Campaign,” which presents the station as radio for discerning listeners. “We wanted an idea that showed that the station was desirable, to differentiate among the competition,” said Paul Bond, WGBH’s associate creative director, who directed the spot. “What would be a sign of that? When even aliens from another world would be so enamored with it, they’d want it.”

That concept “snowballed,” said Jake Messier, marketing director, into a shot-for-shot re-creation of the famous cinematic scene of a pickup at a railroad crossing that has a close encounter with aliens, complete with glowing beams of light, creepy fog, seismic shaking and dashboard-dial needles whirling. The stunned driver watches as his radio is yanked from the dash by invisible forces and floats skyward. The scene fades to the phrase, “Have a close encounter of the thinking kind.”

Bond and Messier declined to reveal the budget for the spot, but estimated that shot elsewhere, it may have cost around $100,000. WGBH was able to produce it for far less using in-house CGI talents, borrowing a truck from a friend of Bond’s, and getting an actor pal of Messier’s from New York City “who worked for very little money,” he said. The 10-foot-tall railroad-crossing light was created for the shoot by the scenery shop Boston University’s School of Theatre. “They built it on a platform and then put it on large bed springs so it could rock, sway and shake,” Messier said. “It worked beautifully.”

The two also credit 89.7’s Managing Director Phil Redo for trusting them to pull off their somewhat daring idea. “Most TV commercials that talk about radio keep blasting call letters and frequency,” Messier said, “but with this one, you had to wait until the end for the payoff.”

As Bond said, “It’s something that makes you think.” (Image: WGBH)

One thought on “89.7 WGBH gets a close encounter of the promo kind”