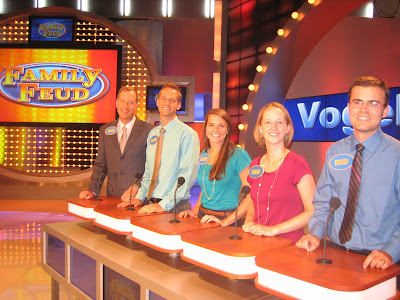 “Being on a syndicated television program was not on any life’s list that I ever had,” said Mark Vogelzang, president of Maine Public Broadcasting Network. And yet there he is, on an episode of Family Feud scheduled to air Feb. 8, alongside his son and daughter and their spouses.

The Vogelzangs heard about a regional audition for the show at a furniture store in Lynn, Mass., just north of Boston, in spring 2011. Between all the kids and grandkids, “we have 16 people in the family, so we figured we could probably mount a team,” Vogelzang told Current. Finally it was decided that Team Vogelzang would consist of Mark, son Aaron and wife Alisha, and daughter Sarah and husband David Jones. Producers from FremantleMedia (which also owns American Idol) liked their performance, and the team moved on to an August 2011 taping at the civic center in Atlanta.

So did they win the top cash prize of $20,000? Did they drive away in the shiny new car? We won’t ruin that for you. This much is certain: “It was loads of fun to hang with my family,” Vogelzang said, “and great to watch them experience TV behind the scenes — and to see our name in lights.”

In the photo, from left: Mark, Aaron, Alisha, Sarah and David (Image: FremantleMedia)