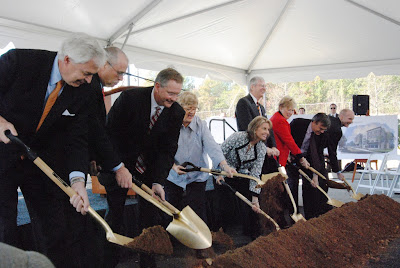 Georgia Public Broadcasting is part of a $4.6 million Knight Foundation project to strengthen local reporting that’s being announced today (Dec. 15). The Center for Collaborative Journalism at Mercer University in Macon, Ga., will bring together professional journalists from the local Telegraph newspaper and GPB Media staffers to help Mercer students learn and employ digital-age storytelling skills, the partners said in a statement. Plans are for the joint newsroom to also launch community engagement projects that will involve local residents in choosing issues to cover. Also, GPB Macon Radio will expand its news staff in Central Georgia over several years.

The center will reside in Mercer Village, a new mixed-use development on campus where ground was broken today. The first floor of the development, nearly 12,000 square feet, will house faculty offices, classrooms and labs for Mercer’s Journalism and Media Studies Department; offices for The Telegraph’s editors; and an open newsroom that will be shared by the newspaper, the journalism department and GPB Media. The pubcaster’s Macon radio and television studios are nearby.

“Journalism and news delivery must stay relevant to changing communities,” said Alberto Ibargüen, president of the Knight Foundation. “To succeed, we need to let the technology take us to new places and experiment with new forms of collaboration.”