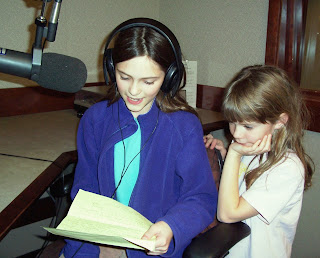 A 10-year-old girl’s recent letter to WXXI in Rochester, N.Y., has inspired its newsroom to present a special series of positive local stories. The weeklong radio project, titled “Liza’s Letter,” kicks off Dec. 26 during Morning Edition. “The reason why I want happy news,” Liza wrote, “is that every morning on the radio they’re talking about sad things, crimes, murders, car crashes, terrible storms, sometimes it depresses people who listen to it. So it would make me happy to hear good news, and would lighten other people up, too.”

“I know you are busy,” she concluded in her letter, “but it would really really be a big favor.”

Yes, Liza, there is a Santa Claus . . . er, news director. So listeners will get to meet Liza and her sister Hannah (above, reading Liza’s letter at the station), and hear several inspiring stories, including about a barbershop where haircuts and healthcare mix, and the softer side of one of Rochester’s toughest hockey players.

Merry Christmas to all, and to all a good news story! (Image: WXXI)