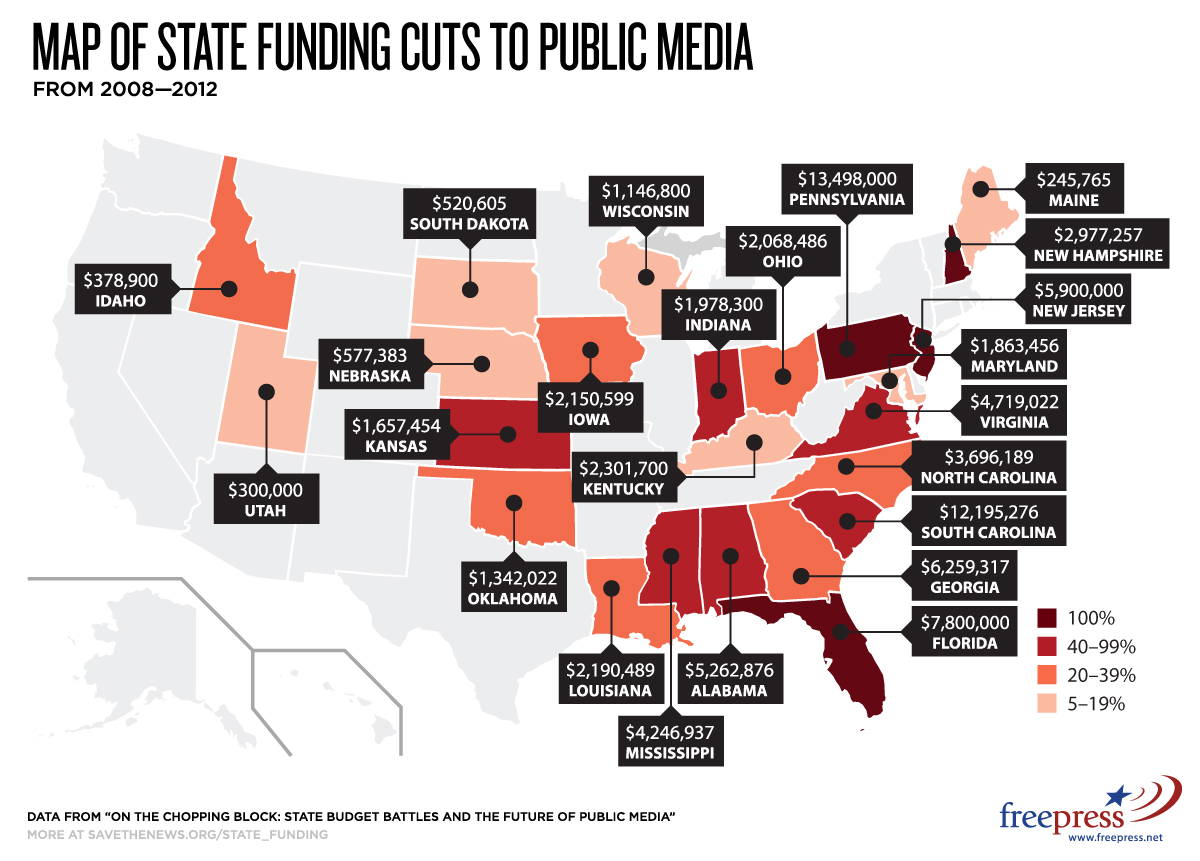 In four years that include the deepening recession, fiscal 2008 through 2012, public broadcasting stations in 24 states have lost a total of $85 million in financial support from state governments, according to a study released last week by Free Press, a progressive media-reform group.

Those states reduced spending on public media by 42 percent of their 2008 amount.

Free Press, which has joined the defense of federal and state aid to public media, gave the study a timely release date, one week before the congressional Super Committee’s Nov. 23 [2011] deadline to cut vast sums from the federal budget and deficit.

Although some state legislatures provide no direct appropriations to pubcasting whatsoever, state funding historically has been a key source of revenue for many public TV operations. The cutbacks, like the recession itself, hit the country very unevenly. While public stations at large got 12 percent of their revenues from state governments in fiscal year 2009, state aid to stations:

The spending cuts took a cumulative sum of $202 million from system revenues during the four years.

The damage was most severe in rural states where state legislatures have given extra support for statewide public TV networks that have high transmission costs for reaching relatively sparse populations.

But state funds likely have been slashed even more deeply than the study indicates because its figures don’t include all cutbacks in state universities’ support for public radio stations. Two-thirds of pubradio stations are licensed to universities, and the cash and in-kind support the stations receive are most often at the discretion of university administrators, not state policymakers.
Stearns said the researchers included only spending lines identified in state budgets, including all of those for public radio that they could find.

The study’s totals also looked at only 24 states, omitting the smaller cutbacks in states where they amount to less than 5 percent.

The report, On the Chopping Block: State Budget Battles and the Future of Public Media, compares the reductions in states’ general ledger funds with huge cuts imposed on pubcasters over four years.

The authors, Stearns and graduate research fellow Mike Soha, argue that “public broadcasters are bearing the brunt of both tough economic times and misguided attacks.” They contend that elected officials in many states were politically motivated to cut pubcasting funds.

The analysis highlights states where pubcasting funds have dropped by 25 percent or more, despite the beginnings of recovery in some state budgets. In Florida, for example, where the governor’s last-minute veto in June zeroed out a $4.8 million appropriation to public TV and radio stations, the state’s general ledger spending increased nearly 34 percent this year.

“In general, the cuts to public media are extreme when compared to budget cuts generally, meaning that public broadcasters are being forced to shoulder more than equal weight in these tough economic times,” the authors write. “The result is that local public media risks becoming less local in their content and services to communities.”

The authors also point to states where lawmakers from both parties worked together to preserve pubcasting funds.

Republican-dominated legislatures in Indiana and South Carolina are among those that resisted proposals to eliminate pubcasting subsidies.

Mystery in the funding puzzle

Because of wide variations in the ways that state governments fund and in some cases operate pubcasting networks, these tax-based subsidies are extremely difficult to track.

“Every state looks different, every budget process is different in how the money flowed to public broadcasting,” Stearns said. “That makes it really hard to generalize on the impact of the cuts.”

“We wanted to see what the impact is when you put all the cuts together,” Stearns said. “There’s been so much attention to public broadcasting cuts at the national level, we wanted to look at what was happening at the state level.”

Skip Hinton, executive director of the Organization of State Broadcasting Executives, closely follows how public TV stations fare in state budget battles. His tally of funding cuts during the same time period had reached $80 million, an estimate that he noted is “pretty close” to what Free Press researchers found.

But Hinton questioned whether Free Press had “oversimplified” its claim that public stations suffered disproportionately large cutbacks compared with other pieces of state budgets. For example, he said, a state government struggling with high health care costs, would have to make deeper cuts from other spending lines. Also, he observed, public TV and radio networks that are part of state governments may not be as vulnerable to cuts as the independent stations run by nonprofits, he said.

Radio, in contrast, relied more heavily on state universities and colleges, which gave 10.5 percent of their revenues, compared with 6.9 percent of public TV’s.

Stearns and Soha see bright spots for public media to recover and potentially reverse the funding losses. They point to states in which lawmakers worked on a bipartisan basis to preserve aid to pubcasting — and call for reforms at the state level to strengthen firewall protections.

“[R]ecent events illustrate that while our public media system still enjoys support across affiliations at the local level,” the report said, “it needs new structures and policies to protect it from extremists’ political meddling.”

The percentage loss in the 24 states has been added to the online version of this story.
ShareTweet EmailPrint More