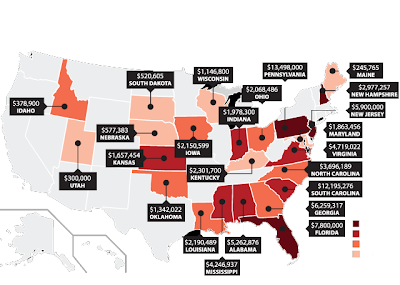 A report released today by media reform advocates at Free Press chronicles the impact of four years of budget battles in state capitals and finds that the public TV system is at a precarious tipping point.

Since the onset of the recession in 2008, public broadcasting stations in 24 states have lost $85 million in financial support from what has historically been one of their most reliable funding sources — state governments.

Public TV networks in at least four states — North Carolina, Oklahoma, Maine and Idaho — are considering shutting down transmitters serving sparsely populated regions, and New Hampshire Public Television is among those drastically scaling back on local production. To adjust to the loss of its entire $2.7 million state subsidy, New Hampshire Public Television has cut two-thirds of its local programming, including its public affairs show N.H. Outlook.

Co-authors of the report, “On the Chopping Block: State Budget Battles and the Future of Public Media,” contend that partisan lawmakers have unfairly targeted public broadcasting by enacting disproportionately deep cuts on stations as they sought to reduce state spending.

“In general, the cuts to public media are extreme when compared to budget cuts generally, meaning that public broadcasters are being forced to shoulder more than equal weight in these tough economic times,” write Josh Stearns and Mike Soha. “The result is that local public media risks becoming less local in their content and services to communities.”

Looking cumulatively over the cuts imposed in the past four years, they estimate that public media has lost $202 million in annual support. Among those hardest hit have been stations in Florida, New Hampshire, New Jersey and Pennsylvania — where policy makers completely zeroed-out pubcasting appropriations. In Alabama, Indiana, Kansas and South Carolina, state aid declined by 50 percent since 2008.

Stearns and Soha see bright spots for public media to recover and potentially reverse the funding losses. They point to states in which lawmakers worked on a bipartisan basis to preserve aid to pubcasting — and call for reforms at the state level to strengthen firewall protections.

“[R]ecent events illustrate that while our public media system still enjoys support across affiliations at the local level, it needs new structures and policies to protect it from extremists’ political meddling.”