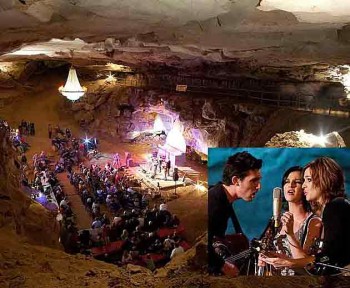 The television version of Bluegrass Underground, now distributed in high-def and Surround Sound by PBS Plus, permits the audience to appreciate more vividly the unique auditorium where it’s recorded: southeast of Nashville in Cumberland Caverns, 333 feet below ground near McMinnville, Tenn.

Cherryholmes, a family band, plays in the cave for a November broadcast.

Over the past 3.5 million years, water carved out what is now the acoustically pure Volcano Room with room for 500 seats.

By 2008 the erosion was far enough along that concerts could be held there and Nashville’s famed country-music carrier, WSM-AM, could begin airing Bluegrass Underground’s original radio version. (It airs monthly on Saturdays, just before Grand Ole Opry.)

The video version is produced by a partnership of the production company Loblolly Ventures, PBS member station WCTE in Cookeville, Tenn., and Emmy-winning producer Todd Jarrell.

So far, PBS stations have picked up the show in 60 markets, including Boston, Dallas, Chicago and Seattle. Underwriters include the Tennessee Department of Tourist Development, Nissan and the City of McMinnville.

The second season includes superstar Vince Gill. “I figure I’ve played everywhere above ground,” the Country Music Hall of Famer told the AP. “We might as well go see what happens when you go underneath.”