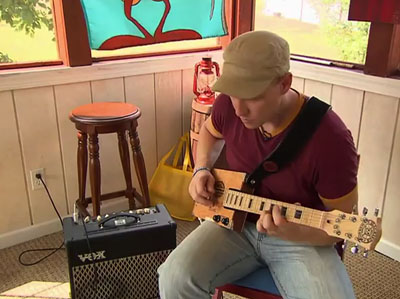 "Tennessee Crossroads," a staple for 23-plus years, is so popular on NPT that it appears twice in the station's weekly top 10. NPT calls it the most-watched locally produced pubTV show in the nation. Pictured: The show paid a visit to Travis Woodall in Jonesborough, who makes guitars out of cigar boxes. Browse the show at NPT's corner on YouTube.

"Tennessee Crossroads," a staple for 23-plus years, is so popular on NPT that it appears twice in the station's weekly top 10. NPT calls it the most-watched locally produced pubTV show in the nation. Pictured: The show paid a visit to Travis Woodall in Jonesborough, who makes guitars out of cigar boxes. Browse the show at NPT's corner on YouTube.

Every week, we and our staff at TRAC Media Services review program performance of public television stations in the 56 markets metered by Nielsen.

What, we wondered, was the relationship between a station’s success and its local programming? This question led to TRAC’s Local Programming Initiative, which will officially launch in October.

Success has different meanings at different public television stations. For some, it means simply being able to pay the bills. But for stations that are revered local institutions with loyal audiences and financial resources, the standard is higher. Almost all licensees have some local shows, but the subject matter and the quality vary dramatically. In our ongoing study of local programming, two insights emerged rather early: First, only about one in three hours of local content is news and public affairs.

The most viewed local programs are lifestyle-oriented, such as gardening, cooking, travel and history. Second, the most successful stations tend to have a repertoire of local program genres that serve a variety of audience and civic functions.

Each production decision can affect others because stations have limited airtime as well as other resources. In TRAC’s work on local programming, we have found that stations have very limited airtime for scheduling local shows. Given the “must-carry” programming that PBS requires member stations to broadcast in weekday kids’ blocks or in evening primetime, stations begin with only about 40 open hours in a broadcast week — most of it on the weekend.

That leaves little time to make a success of a local programming strategy. How stations use their discretionary time is critical. TRAC developed a mini–case-study approach that examines how particular programming practices affect a station’s performance. The topic of one such case study is Nashville Public Television in Tennessee.

Nashville Public Television (NPT) began in 1962 as a humble school-board licensee. But it was able to gradually transform itself into one of the leading community-licensed stations in the system. Other stations can learn a lot studying that metamorphosis, especially by focusing on NPT’s local programming strategy.

Several local programs are on NPT’s list, including a bluegrass music special, Tennessee Gardener and Tennessee Crossroads. The latter makes the list twice with its two broadcasts a week.

We use NPT as a mini-case study because of how the station has transformed its stable of local program formats to serve various complementary functions throughout the month.

The station’s local programs fall into four broad strands. Of particular interest is how the programs are funded and what audience functions they serve.

The “must-haves”: All public TV stations have such obligatory shows. NPT’s are about local issues, news and public affairs. Their ratings vary by topic and time slot. General operating budgets fund these programs at most stations. (Although stations that manage to get them underwritten are of particular interest in our local programming study — more about that in a later article.)

Lifestyle: Series such as Tennessee Crossroads and Volunteer Gardener. These often draw higher-than-average ratings of 3, 4 and 5. While the must-haves furnish context and analysis for political and communal activities, lifestyle offerings document and celebrate local events and regional ambience or furnish pragmatic advice for gardening and home repair.

These formats attract large and diverse audiences, which generates legitimacy for the station across political and social constituencies. Further, on-air promotion around these shows gives a crucial boost to programs in other parts of the broadcast schedule. So these genres fulfill many functions for a station.

Stations vary dramatically in the level of underwriting support these shows can generate. At NPT these titles are not completely underwritten.

Next Door Neighbors examines neighborhood ethnic issues. NPT creates and/or fosters partnerships for these projects, and their success is measured in public-service “units of good” as well as many awards (think Emmys). The function and formats of these programs are generally news/public affairs or documentary. One of NPT’s characteristics is the relatively long time frame they will devote to a particular local issue.

Many units-of-good programs aim to affect social behavior, and that lends itself naturally to social metrics that can measure the success of the partnership and the programming in the community.

Warm-glow programs: These are often single programs or miniseries focused on large, emotionally resonant subjects, such as Beautiful Tennessee or the sesquicentennial miniseries on Tennessee’s Civil War. They attract funding from local partners because they focus on local history, environment, natural/cultural assets and well-being. Such titles also address viewers’ criticisms that television “only dwells on problems” rather than celebrates community assets, achievements and ambience. Underwriters and partners like to support these feel-good programs and bask in their warm glow.

The takeaway from this overview of Nashville’s efforts is that “local programming” is varied in format and serves multiple complementary functions for the station’s audience. Each strand generates and sustains various institution-building functions so that the audiences attracted by popular fare (Tennessee Crossroads) are alerted to other local programs that serve the community, educating people and bringing them news and discussion of public affairs.

The mix of genres is a big part of the production culture that defines a station.

In marketing legend, McDonald’s needed to come up with a steady stream of new fast-food items to survive and prosper. When the company was ready to launch a new menu item, its president would report it was time to go in the back room and put “the secret sauce” on the new burger — and voila, success! That secret sauce made the difference because any kitchen can make a burger, but McDonald’s was said to add something special that set its product apart from others.

Each station concocts a secret sauce that flavors its programs.

At NPT the sauce flows from an iterative process among the top managers, producers and others, who continually assess each program, considering quality, audience reaction, economic viability and other factors.

“As a former producer,” says NPT chief executive Beth Curley, “I learned a lot from making a program and seeing the ratings the next day. I learned what worked and what didn’t while everything was still fresh in my mind.” In other cases, the station refines a program for years before any final verdict. In St. Louis, KETC produced its public-affairs show Donnybrook foralmost five years before its elements jelled and it became a hit.

In Nashville and at other stations with successful local strategies, the station staffs routinely examine programs and their expectations, revise and refine the productions, test and retest. What they discover and decide is unique to that station, that audience and that time. The result of the local production review process, on-air promotion, and the appeal of the produced programs determines success.

The factors come together in what our friends in public radio call “stationality.”

Just as we use the word personality to describe and differentiate among people, successful stations have their own unique personalities that resonate with their audiences and power elites.

And that is especially important because local programming plays a unique and crucial role in a pubTV station’s survival. In American public television there is no “national schedule.” Instead there are 210 schedules broadcast across five time zones. A pubTV station prospers or perishes in a specific market or community — geography is destiny.

A station in Brownsville, Texas, has a different pool of assets than WGBH has in Boston. A state system like Nebraska has more available resources than the system in New Hampshire. Geography matters because each market’s resources (such as people, climate, industry and educational amenities) determine in large part the amount of support a local station can receive.

PBS programming has its own characteristic attractions. Some places have more enthusiasts for that kind of fare than other places do. Fans of public broadcasting exist in all markets — in Odessa and Oklahoma as well as Oregon. The key factor is, how many of them are in your market? Are there enough to sustain the station? Often, survival in a market with few PBS schedule loyalists is determined by local programs’ ability to attract substantial and supportive audiences to the station.

Any number of station leaders have managed their resources well, yet their stations still failed to become community institutions. One reason we suggest for this is that stations need not just local programming, but a mix of local programming that serves various functions in the community.

There are small stations with gifted managers and meager resources that produce outstanding local programming; they have the secret sauce. Great managers matter, but so do great local shows. And when the culture is right, the result is “stationality” — a great station with a personality that moves its community.

The photo and caption were added for this online edition.