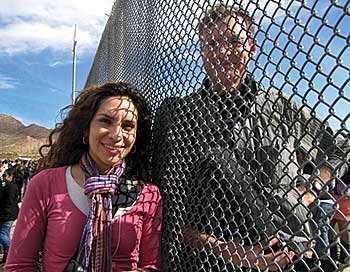 As a reporter for the multistation “local journalism center” Fronteras: The Changing America Desk, I am surrounded by borders. I live in Texas, work in New Mexico and regularly report in Mexico. In a 15-minute drive, I can be in a different state or a different country.

It’s a tricky but fascinating work environment that’s further complicated by the drug war next door.

The toughest but most compelling stories that we cover come from Mexico. In the past four years, Ciudad Juárez, El Paso’s sister city to the south, has commanded national attention with a horror show of headlines — a headless body strung up from a inner-city overpass, a deadly car bomb and a massacre at a teenage birthday party.

Mexico’s nationwide drug war has brought a level of violence never before seen by people living today. Most of us who cover the border have never reported in a war zone and have learned on our own how to adapt to a high level of uncertainty.

Finding our way is like learning to scuba-dive in a murky lake with a swift current. It seems impossible at first but in the end makes you a better swimmer. Unlike divers, though, reporters don’t have a compass to tell us whether we are swimming in the right direction. Instead, most of us rely on our gut.

Safety has become a top priority when I cross the border from one of America’s safest cities into Mexico’s murder capital. American reporters generally don’t run the same risks that our Mexican colleagues do. A hit on one of us might bring too much unwanted attention to a criminal enterprise that prefers to operate in the dark. But there are no hard and fast rules that will guarantee a safe return.

One rule I obey is to expect that anything is possible. In a city that averages seven murders a day, including of innocent people, I’ve had to make peace with the possibility that I could be one of them. I’ve also had to sit with my family and explain why I feel strongly about continuing my work despite the dangers.

When I cross the border, my editor always knows where I am, who I’m with and even what I’m wearing. I make mental notes of my surroundings: license plate numbers, street names, taxi drivers’ tattoos. I trade my loose curly hair, heels and slacks for a french braid, cargo pants and Mary Janes.

Most days Juárez gives a false impression of normalcy and these precautions seem silly, but I fear what could happen if I let my guard down. One foggy December morning I drove up behind a drive-by shooting only minutes after the gunfire. Had I arrived slightly earlier I might have been caught in the middle. Usually I don’t realize how much tension I carry until I cross the border again beneath the sign that says “Welcome to the United States” and relief washes over me.

The murky waters of Ciudad Juárez are cloudiest when it comes to finding sources. Whom can you trust in a place where the criminal underworld, like ozone on a hot day, is invisible but everywhere? Cops, judges, politicians, businessmen, even reporters are paid off to look the other way or take part in crimes. Just three years ago a former Juárez police chief was caught with a load of drugs at the El Paso port of entry.

There are honest people, but no one can assure you who they are. So generally I go by the advice offered by most U.S. law enforcement officers: Don’t trust anyone. That’s not easy and not always possible. The best I can do is ask around about my sources and look them up in newspaper archives.

But sometimes I have to trust a stranger to guide me through a bad neighborhood where new visitors aren’t welcome. A couple of times I’ve had to stop my work after realizing that digging too deep into a particular subject or source might threaten my safety. It’s a tough decision that reporters must make for themselves — which stories are worth the risk.

There’s a saying in journalism, “If your mother says she loves you, check it out.” Triple-checking information is critically important when reporting from Mexico. Because of the ongoing violence the Mexican federal government is under intense pressure to point to positive developments, even when there are none. As a result, police sometimes will arrest scapegoats and torture them to confess responsibility for major crimes. On a recent Sunday night, federal police issued a press release that implied 1,000 people had been arrested for human trafficking during a major operation in downtown Juárez. The information turned out to be inaccurate.

In times like these, reporters must be especially skeptical when the government announces statistics, arrests and lofty new initiatives. Exercising skepticism can be a challenge on a tight deadline, but we try to follow up by interviewing local experts, community members and government watchdog groups.

In war, there are always victims. Many suffer in Juárez every day. As reporters it’s our responsibility to approach them. But how do you start a conversation with a mother sobbing outside a hospital while her teenage son lies dying on an operating table? In these moments I put aside my deadline, forget my editors and simply ask myself, What if she was my mother? What if he was my brother?

I approach the survivors humbly and respectfully and open my heart to their pain. If that mother shares even a few words those words, they may make somebody in Madison, Wis., put down the morning coffee and listen. That listener might even care. And if you’re really lucky, that listener may be inspired to take some kind of action — whether it’s a polite gesture to a stranger or a generous donation to an important cause.

Despite Mexico’s dire situation, there are also some inspiring stories on the border. I recently reported on the lifesaving potential of a Mexican drug that’s effective against the venom of a scorpion species found in both the United States and Mexico. The amount of cooperation and dedication by scientists and doctors from both countries was truly impressive. In another story, an El Paso nursing school helped start a support center for new moms in Juárez. One objective is to get mothers to breastfeed longer, which can diminish the region’s epidemics of obesity and diabetes.

Stories like these motivate me the most as a reporter. Those are the stories I’m proudest to put on the air.

As reporters for Fronteras: The Changing America Desk, our mission is to look beyond the borders that surround us. Some of our reporters work nowhere near the border but report daily on the effects of border issues from the interior of the country. In Arizona and New Mexico, state legislators are drawing national attention with their attempts to remake immigration laws. Nevada police seize thousands of pounds of Mexican drugs a year that otherwise would be sold and consumed in big American cities. In San Antonio and El Paso, wealthy Mexican refugees are boosting the local economy by buying property and starting new businesses.

Our reporters also examine the borders developing within American communities, as in Southern California where a growing population of Iraqi immigrants is clashing with earlier generations of migrants to the Sun Belt. We look at the intense debate over redistricting in Native American territories and how the nation’s changing demographics affect public policy.

The work is important because we dispel the myths about life on the fringes of our country. We introduce the characters who live here, surprise listeners with stories of collaboration and innovation, and illustrate the shared responsibilities between sovereign neighbors. And though at times we may feel like divers without a compass, we are strong swimmers.

Fronteras: The Changing America Desk is a CPB-assisted reporting network that serves seven stations from bases at member stations KJZZ in Phoenix and KPBS in San Diego.
Mónica Ortiz Uribe is senior field correspondent with Fronteras: The Changing America Desk. She is based at KRWG-FM in Las Cruces, N.M. She previously covered the border as a freelancer for NPR, PRI and Radio Bilingüe, and started her career at the Waco Tribune Herald in central Texas.
Comments, questions, tips? mortiz@rioradio.org
ShareTweet EmailPrint More