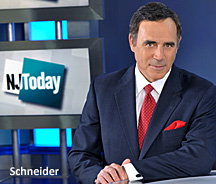 Mike Schneider, a familiar anchor and reporter who has worked with the four major commercial nets and major station newsrooms in the Northeast in the past 30-plus years, was announced Wednesday (Sept. 14) as anchor and managing editor of NJTV’s nightly state news program, NJ Today. He and his physician wife raised their children in Bergen County, N.J., and he ran for Congress there as a Democrat in 1998.
He’ll work with new Executive Producer Bob Males, a New Jersey native and resident who previously worked as e.p. of New Jersey and Long Island news for Verizon’s Fios service, and Michael Aron, longtime senior political correspondent at New Jersey Network, NJTV’s predecessor, who joined NJTV as political correspondent in August. The state-owned NJN network lost operating funds in the state’s fiscal crisis earlier this year and was replaced by NJTV, a new service set up by New York-based WNET under a new nonprofit, NJ Public Media.
Aron gave a testimonial for NJTV in last week’s news release about Schneider’s hiring. “I look forward to working with Mike and have already had good interactions with the new executive producer Bob Males,” he said. “I believe the future of NJ Today is in good hands, and I look forward to being a part of it.”
Starting from scratch July 1 — and leaving behind most of NJN’s much larger news staff — NJTV’s news program has had a rushed and rough startup. It was widely criticized for late and limited coverage of flooding and damage from Hurricane Irene in August.  NJ Today is “still considered by producers as a work-in-progress,” NJTV said. Among the strongest critics was Democratic Assemblyman Patrick J. Diegnan Jr., who said NJTV’s news coverage was a joke and “a tragedy.” Diegnan’s bill to head off the NJTV contract passed the Assembly in June but died in the state Senate.
ShareTweet EmailPrint More