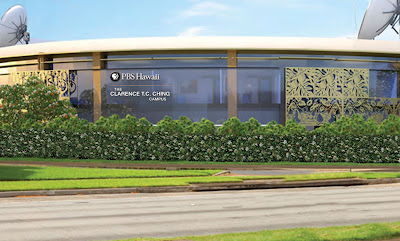 PBS Hawaii has received a $5 million grant from the Clarence T.C. Ching Foundation to build a new facility in Honolulu. The station said it has an “urgent need” for the space as it is losing its lease at the University of Hawaii at Manoa, its home for the past 40 years. The commitment brings PBS Hawaii past the midway point in its $30 million capital campaign.

In traditional island style, PBS Hawaii rolled out the announcement with a visual story. A Moanalua High School student, part of the station’s innovative Hiki No journalism program, introduced “A Tree Grows on Nimitz Highway,” a short video about the life of the late Clarence T.C. Ching and his contributions to the state.

PBS Hawaii will renovate and expand an existing one-story building into the Clarence T.C. Ching Campus, above, and relocate operations in 2014. (Image: PBS Hawaii)