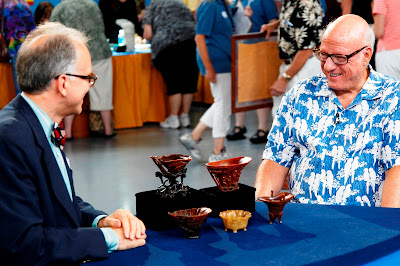 Public TV ratings fave Antiques Roadshow recorded its highest-value appraisal ever on July 23 in Tulsa, Okla. Asian arts expert Lark Mason estimated that a collection of five late 17th-century/early 18th-century Chinese carved rhinoceros horn cups was worth between $1 million and $1.5 million. The owner (above, facing camera), who wants to remain anonymous, was one of 6,000 ticket holders who brought items to the Tulsa Convention Center. He told Mason he began collecting the cups (below right) in the 1970s and had no idea of their value.

The second highest-value appraisal recorded by Roadshow was also Chinese: A collection of carved jade bowls, estimated to be worth as much as $1.07 million, was discovered at an appraisal event in 2009 in Raleigh, N.C. But the bowls sold at auction the next year for just under $495,000.

Tulsa was the fourth stop on Antiques Roadshow’s six-city 2011 production tour. The three episodes produced from the Tulsa event will air as part of its 16th season, from January to June 2012. (Images: Antiques Roadshow)