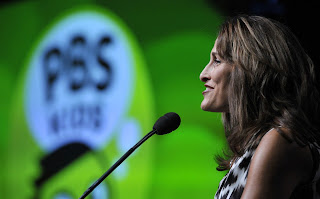 BEVERLY HILLS, Calif. — Jane Lynch, the villainous cheerleader coach on Fox’s Glee, will have a guest-star as an animated supervillain on a movie-length episode of WordGirl, PBS’s vocabulary-building kids series. Lesli Rotenberg, PBS s.v.p., children’s media and brand management (above), announced Sunday (July 31) that Lynch will supply the voice of a character who uses mean words as secret weapons in an episode to air next year, aimed at helping kids deal with verbal bullying.

Sesame Street, entering its 42nd season this fall, will include parodies of the Iron Chef cooking show and Glee. In addition, Elvis Costello will perform a duet with Elmo, “Ate My Red 2.”

The Cat in the Hat Knows a Lot About That, introduced last fall, is tied with longtime fave Curious George as the second-most watched kids show on PBS. Both have a 4.8 Nielsen rating with children between the ages of 2 and 5. 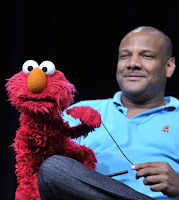 Kevin Clash, the puppeteer who plays Elmo on Sesame Street, said the popular puppet is based on his parents. “It’s my mom’s spunkiness and militancy, and it’s my dad’s creativity and sweetness,” said Clash (right, with his pal) during a session on the documentary “Being Elmo: A Puppeteer’s Journey,” scheduled on Independent Lens this fall.

Starting this summer, the top four PBS kids shows each will be showcased with a quarterly pop-out event. Dinosaur Train will be featured this summer, Curious George in the fall, Cat in the Hat during the winter and Super Why! next spring. (Images: PBS) — Barry Garron for Current