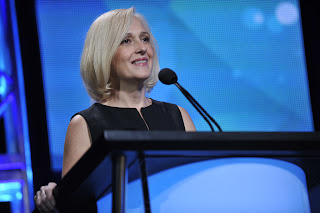 BEVERLY HILLS, Calif. — More than two months after raising the prospect of primetime promotional breaks within programs, PBS is still studying the idea. PBS President Paula Kerger said Saturday (July 30) at the annual Television Critics Association press tour that viewer testing is ongoing at a Nielsen research facility in Las Vegas. Information from that research will be considered along with feedback from public stations, she said.

Proponents of the idea say the promotional breaks will give viewers more information about upcoming programs and allow the audience to from one program to the next, all without reducing the actual amount of program content. Opponents warn that such a move goes against the decades-old PBS tradition of not interrupting programs except during pledge periods.

PBS will benefit from knowing more about the preferences and expectations of viewers whether or not the new research leads to changes, Kerger said.

Earlier in the press conference at the Beverly Hilton Hotel, Kerger reported that primetime viewership had increased more than 7 percent over the previous year and  viewing by children, ages 2 through 11, was up 23 percent. (Image: PBS) — Barry Garron for Current