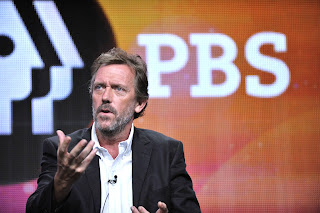 BEVERLY HILLS, Calif. — TV’s Dr. Gregory House will reveal a little-known specialty this fall: a talent for singing and playing jazz piano. Hugh Laurie (right), famous for playing the cranky doctor on the hit Fox show House, told journalists Saturday (July 30) at the Television Critics Association summer press tour that he doesn’t consider himself the equal of the best jazz musicians in New Orleans, but he wasn’t about to pass up the chance to tape an episode and cut an accompanying CD for Great Performances. The show, “Hugh Laurie: Let Them Talk — A Celebration of New Orleans Blues,” is scheduled for Sept. 30.

An opportunity like this “is not going to come my way again,” Laurie told critics. “I will either say to my grandchildren, ‘I could have made a record,’ or I can say, ‘here it is,’ and they’ll say, ‘this is the worst thing I’ve ever heard.'” Nonetheless, as Laurie noted, “this is a diem I had to carpe.”

Laurie said he sifted through “hundreds or thousands” of songs before deciding on what to perform, each chosen because it was different from the others. Speaking more as a musician than a physician, he said, “the whole project is really close to my heart.” — Barry Garron for Current

After six years in development, the new show from Fred Rogers’ production company has finally been announced, reports the Pittsburgh Post-Gazette. The animated Daniel Tiger’s Neighborhood will be the Fred Rogers Company’s first PBS offering since its iconic Mister Rogers Neighborhood. “This show is meant to target boys and girls who are 3 or 4 and be of interest to children between 2 and 5, so the focus is much more narrow than the Mister Rogers focus,” Kevin Morrison, Fred Rogers Co. c.e.o., told the paper. Meanwhile, Linda Simensky, v.p. of PBS children’s programming, said stations will continue to receive the original Mister Rogers “for the time being. It’s hard for me to say how long. It’s up to them how long they want to keep feeding the show.”

The 1950s are often considered the Golden Age of television but Phil Rosenthal (left), creator of Everybody Loves Raymond, doesn’t agree. “There was never a Golden Age,” he said during a PBS press conference for America in Primetime, a four-part series on the creative process that brings characters to the small screen, which premieres Oct. 30. “There was lots and lots of crap with a few good things.”

Rosenthal used the Q-and-A session to ridicule network interference, scold executive decisions and condemn the large number of reality programs. He recalled receiving a note after eight successful seasons of Raymond suggesting that Debra, the character played by Patricia Heaton, was too shrill. It was duly ignored.

As for reality shows, Rosenthal said, their proliferation could mean “something larger than a trend. It could signal the end of civilization.” — Garron

A Central Park concert by internationally acclaimed tenor Andrea Bocelli will be the finale of the PBS Fall Arts Festival, PBS President Paula Kerger revealed. The September performance, free to the public, will be recorded in high definition to cap the network’s first arts celebration later this year (Current, July 11). (Images: PBS)