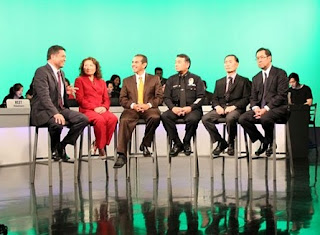 KCET in Los Angeles raised $70,495 during its May 24 live televised benefit for Japan, 100 percent of which will go to relief efforts in the regions most affected by the earthquake and tsunami disasters, the station says. L.A. Mayor Antonio Villaraigosa made a special appearance during the three-hour primetime show, which will be rebroadcast locally from 3 to 6 p.m. Saturday. KCET is working with U.S.-Japan Council to disburse funds to NGOs in Japan. Above, from left, KTLA’s Frank Buckley and actress Lily Mariye with Villaraigosa, L.A. Deputy Police Chief Terry Hara, actor George Takei, and U.S.-Japan Council’s Bryan Takeda during the telethon. (Image: KCET)