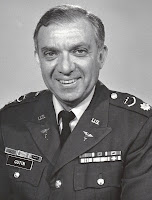 Army Lt. Col. Howard Gutin, Ret., a former board chairman of the Corporation for Public Broadcasting and Texas public broadcaster, died April 27 in Indialantic, Fla. He was 80.

Gutin became interested in broadcasting during his 32-year military career, serving as director of the Brooke Army Medical Center TV facility in San Antonio. After his 1979 retirement from the Army he spent seven years producing KLRU’s popular Austin City Limits. He went on to head up the Southwest Texas Public Broadcasting Council.

In 1984, President Ronald Reagan appointed him to the CPB Board. Gutin was voted vice chairman in 1986 and was chairman from 1987 to ’89. Upon his departure that year, the board honored him for his “selfless dedication, hard work, and effective contributions to the Corporation and the entire public broadcasting community.”

Gutin was involved in the noisy 1985 controversy over a CPB trade delegation’s trip to Moscow (Channels, July/August 1985, via Current archives) that led to the highly publicized resignation of its president, Edward Pfister.

He was born on Aug. 17, 1930, in Paterson, N.J. to Jacob and Esther Gutin. He joined the New Jersey National Guard and then the Army, serving in Europe, Korea, Vietnam and the United States. During his time in the military he also earned a degree from the University of Nebraska.

While in Vietnam he was exposed to Agent Orange, a toxic defoliant. His family told the San Antonio Express-News that led to a year’s hospitalization and removal of his stomach.