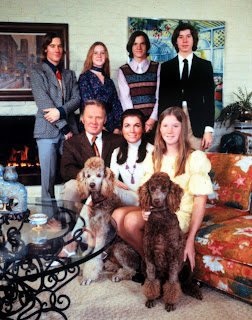 A marathon of  PBS’s original 1973 American Family documentary episodes begins at 11 p.m. April 23 on WNET/Thirteen in New York City, immediately following HBO’s premiere of Cinema Verite, its docudrama on what happened behind the scenes of what is widely considered the first reality TV program. PBS SoCal/KOCE kicks off its American Family marathon at 11 p.m. Pacific, and the World multicast channel runs all 12 hours starting at noon April 24 with a re-air beginning at midnight April 25.

The groundbreaking and controversial documentary project chronicled the daily interactions of the Loud family (image: PBS) of Santa Barbara, Calif., including when wife Pat asked Bill for a separation. Son Lance was the subject of a followup 2003 PBS documentary, Lance Loud! A Death in an American Family, shot in 2001 when he was dying of hepatitis C and HIV.

The original American Family has not been seen in its entirety in more than 20 years (Current, Nov. 5, 1990). The new HBO film focuses on Alan and Susan Raymond, who filmed the original documentary for WNET.