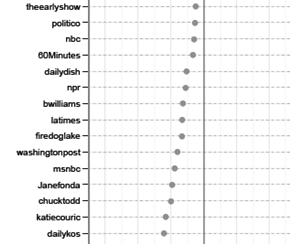 An analysis of NPR’s connections on Twitter “shows it has the sort of network you’d expect to see from a left-of-center person or institution,” reports Forbes today (March 22). The mag cites data from a Duke University study examining whether Twitter could be used to plot ideological affiliations of political candidates. As part of that study, researchers looked at the Twitter networks of individuals and brands in the media.

Forbes asked Duke researcher David B. Sparks where NPR’s Twitter connections fell on the study’s conservative-to-liberal curve (right). He said somewhat to the left of center, but further to the right than CBS News anchor Katie Couric, the Washington Post, the Los Angeles Times or NBC News anchor Brian Williams.

Of course the results don’t directly reveal the ideologies of the entities, only the makeup of the networks that surround them, Forbes noted. “However, for the purposes of our paper and possibly for thinking about the media, perceptions may be what is actually important,” Sparks said.