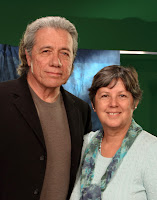 Patricia Boero has resigned as executive director of Latino Public Broadcasting, the organization announced today (Feb. 7), to spend more time in Uruguay with an ailing family member. Her departure is effective March 8. Boero (shown with LPB Chairman Edward James Olmos) said in her letter of resignation: “I am sad to be leaving the board and my team, but trust that the organization will see this transition as another opportunity for renewal and growth.” Luis Ortiz, managing director, will step in as interim. Boreo has been in the position since August 2007. In September 2010 she won the Latina Leaders Award from Imagen Foundation and Dolores Huerta Foundation.