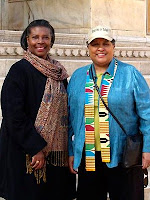 The hosts of WTTW’s nationally syndicated Grannies on Safari are in the midst of the chaos in Egypt, where protestors demanding the resignation of President Hosni Mubarak have been rioting for days.

According to the Chicago Sun-Times, Regina Fraser and Pat Johnson (right, image: Grannies on Safari via AP) arrived with their group on Jan. 26 and are hoping to leave before their intended departure date of Feb. 4. At one point, their driver had to drop the group two blocks from the hotel because the bus couldn’t get through all the protestors. “We had to circumnavigate around the hotel because the crowds were massing up,” Fraser said. They made it in just before the hotel locked its doors.

The cameraman for their show, Julio Martinez, was briefly detained by authorities.

The Associated Press did not report how many persons are in the group, which includes travelers from five states and the District of Columbia.

SUNDAY UPDATE: CNN is reporting that Fraser called the U.S. Embassy in Egypt several times, with no answer. Finally someone at the embassy picked up the phone today (Jan. 30) and transferred her to a recording advising callers to visit the U.S. government website – but Internet access had been blocked by the government days ago. “How could I find out information if the internet is not working?” Fraser said. She told CNN the group is in the country for a Nile cruise. Fraser also spoke by phone with an ABC reporter, see the video here.