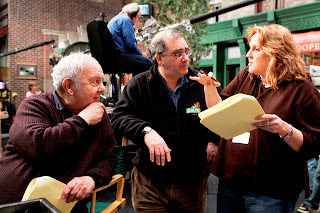 Tony Geiss, composer and lyricist for Sesame Street for almost 40 years as well as a creator of several Muppets, died Jan. 21 in New York City of complications from a fall. He was 86.

Geiss won 22 Emmys for scriptwriting and songwriting. He created the Honkers Muppets and, most recently, Abby Cadabby. He was a co-creator of Sesame’s “Elmo’s World” segment, composing its theme song (which has been viewed more than 25 million times on YouTube). He also co-wrote the feature film “Sesame Street Presents: Follow That Bird,” in addition to several other films.

His writing credits include working with David Frost, Bill Cosby and Groucho Marx.

Nicholas Anthony Geiss was born in New York City on Nov. 16, 1924, and grew up in the West Village. His wife of 60 years, the former Phyllis Eisen, preceded him in death in December 2009. His New York Times obituary lists survivors including an extended family as well as “admirers of all ages, who joyfully sang along with his songs without knowing their author, nourished by his creative brilliance.”

See a 2004 interview with Geiss for the Archive of American Television here.