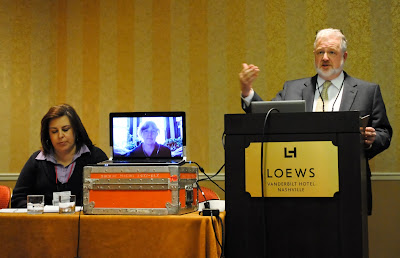 Sure, she was snowed in. But WGBH’s media archivist Karen Cariani in Boston was still able to interact with the audience in Nashville via the wonder of technology for the American Archive session today (Jan. 12) at NETA’s national conference. (“It’s not snowing anymore, but still blowing,” she reported.) That’s e.p. Amy Shumaker of South Carolina ETV to the left of Cariani, and Matthew White at the podium, he’s the executive director of the ambitious project to identify, digitize and organize countless hours of historic pubcasting content.

Before updating attendees (don’t forget, Jan. 31 is deadline for inventory grants), White showed an American Archive promo that brought a delighted round of applause: It contained a grainy, black and white recording of legendary newsman Edward R. Murrow, cigarette in hand, talking about that day’s launch of a service called “educational television.” Addressing the viewer on Sept. 16, 1962, he intones, “Commercial television did not completely fill the promise of this medium. That’s why educational television was conceived … If occasionally it brings laughter to your lips, I trust that on occasion it will bring a tear to your eye.”

2 thoughts on “And now, from the American Archive: Edward R. Murrow extolling the wonders of “new” educational TV”