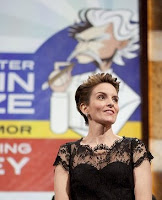 The Washington Post is reporting that PBS edited out controversial remarks made by Tina Fey (left) during her acceptance speech for the Kennedy Center’s Mark Twain Prize last Tuesday night (Nov. 9). Here’s what didn’t make it into the Sunday (Nov. 14) broadcast:

“And, you know, politics aside, the success of Sarah Palin and women like her is good for all women — except, of course, those who will end up, you know, like, paying for their own rape ‘kit ‘n’ stuff. But for everybody else, it’s a win-win. Unless you’re a gay woman who wants to marry your partner of 20 years — whatever. But for most women, the success of conservative women is good for all of us. Unless you believe in evolution. You know — actually, I take it back. The whole thing’s a disaster.”

Peter Kaminsky, one of the show’s executive producers, said the the 90-minute program ran about 19 minutes long. “We took a lot out,” he told the paper. “We snipped from everyone.” (Image: PBS)