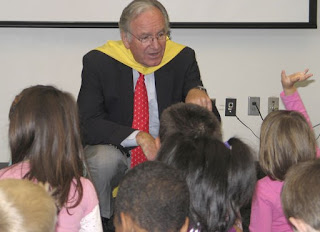 Sen. Tom Harkin (D-Iowa), on Wednesday (Oct. 6) was declared an official Super Reader during a visit to Marshalltown, Iowa, to honor his work in promoting and helping fund public television, according to the local Times-Republican. As such, Harkin is now eligible to wear his very own Super Reader Cape. “Where I work, they will probably not let me wear it,” Harkin told kids at the Marshalltown Public Library. “But when I go back to my office, I can wear it.” Presenting the honor was Dan Wardell, Iowa Public Television Kids Club host. Super Reader is part of PBS’s Super Why! literacy initative. (Image: Ken Black, Times-Republican)