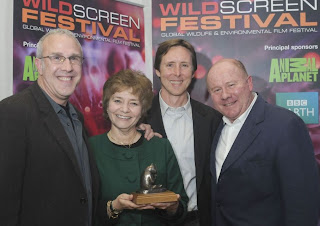 Here’s a unique award for an icon series. Nature has won the prestigious Christopher Parsons Outstanding Achievement Award presented at the 2010 Wildscreen Festival earlier this month in Bristol, U.K. It’s the first American production to be so honored in the festival’s 28-year history. It’s the top prize in the awards, dubbed the Green Oscars for their equivalent of the Academy Awards. The Parsons honor goes to “an organization or individual that has made a globally significant contribution to wildlife filmmaking, conservation and/or the public’s understanding of the environment.” It’s named for the late Christopher Parsons, Wildscreen’s founder, head of the BBC Natural History Unit and executive producer of Life on Earth. Previous Parsons award winners include Sir David Attenborough. Accepting the award, above, from left: Fred Kaufman, series executive producer; Janet Hess, series editor; and Bill Murphy, series producer. The presenter, right, is Brian Leith, producer of such films as Elsa’s Legacy: The Born Free Story. (Image: Wildscreen)