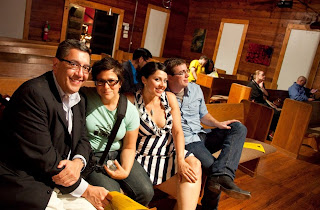 Take an evening of local and national food programs, encourage viewers to interact via Twitter and what do you get? Bon AppeTweet. And HoustonPBS’s social media experiment with that awesome name was a huge success Wednesday night (Oct. 7) reports station spokesperson Julie Coan. “We got so many Tweets that it crashed the software we set up to count them,” she told Current.

Food programs are very popular on Channel 8, and lots of local “foodies” use Twitter to share local restaurant info, so the combo was a natural. National programs during Bon AppeTweet (seriously, is that the best name or what?) included several from WQED’s food dude Rick Sebak, who also Tweeted along. Whole Foods Market issued a Tweet Challenge, donating $1 per Tweet to the station to support food-related shows, and the Houston Chowhounds hosted a viewing party/fundraiser at 14 Pews, a local microcinema in a converted church. “Not only was our hashtag #HoustonpbsEats trending in Houston, it was actually trending in Pittsburgh for a while last night, too!” Coan said. “WQED said we put the ‘fun’ back in fundraising.”