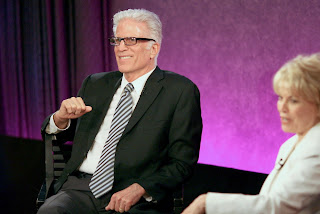 Angela Lansbury, Jimmy Fallon, Brian Williams and Joel Grey are among celebrities set to appear on At the Paley Center, a new interview series produced by a partnership of Paley Center for Media and WNET.org’s Creative News Group, the two announced Wednesday (Sept. 22). Hosted by Pat Mitchell, president of the Paley Center and past president of PBS, returns to the network as host. Each half-hour program in the six-part series features a conversation with someone who has made a significant contribution to media, particularly television. First up is actor/activist Ted Danson on Oct. 1 (above, with Mitchell; image: Michael Priest Photography). Episodes of At the Paley Center will stream online after each week’s show. WNET.org/Creative News Group’s executive producer for the show is Mary Lockhart, with Stephen Segaller and Neal Shapiro as executives in charge.