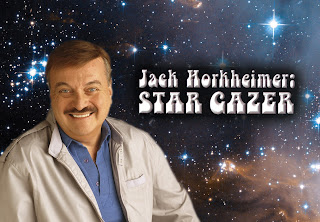 Jack Horkheimer, an astronomer who created and hosted the weekly pubTV program Star Gazer from WPBT in Miami, died Aug. 20 in that city. He was 72, the Los Angeles Times reports. Horkheimer also had been director of the Miami Science Museum and Space Transit Planetarium for 35 years until his retirement three years ago.

He began the show, which extolled naked-eye stargazing, at the station in 1976 as Star Hustler; it went national in 1985 and became Star Gazer in the 1990s. He offered it free to pubTV stations and some 200 carry it.

WPBT told Current that Horkheimer “gave his age age as somewhere between post-puberty and pre-senility.” He especially enjoyed his cartoon alter-ego in the monthly “Star Gazing With Jack Horkheimer” comic strip in Odyssey Magazine. Several years of cartoons were assembled into a book.

In 2000 Horkheimer received the prestigious Klumpke-Roberts Award from the Astronomical Society of the Pacific for making astronomy “so attractive that people can’t help but be interested in learning about it.”

He often said he’d like this on his headstone:

“Keep Looking Up was my life’s admonition, I can do little else in my present position.”