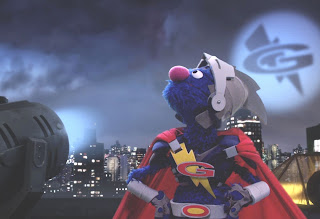 Three new Sesame Workshop series will premiere at MIPCOM in Cannes, France, Oct. 4-8, the Workshop announced today (Aug. 2). In the first, a furry Muppet fave dons a red cape and silver helmet to transform into Super Grover 2.0, who “observes, questions, investigates and reports” to young viewers. That will also run as segments on the international Sesame Street in the U.S. Also in the lineup is Count TV, hosted by Count von Count and ending with an animated Bert and Ernie singing and tap dancing about the number of the day. Goodnight, Elmo takes kids through the bedtime routine as Elmo and his dad say goodnight, put on pajamas and read a story — and sometimes Elmo gets to make up his own tales. (Image: Sesame Workshop)