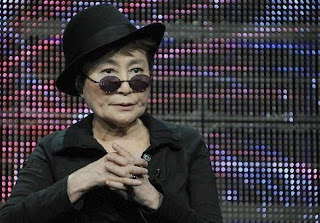 Yoko Ono generated news from the PBS stage Thursday (Aug. 5) during the TCA Summer Press Tour, saying she still opposes parole for her husband John Lennon’s killer even after 30 years.

As for the American Masters production of “LennonNYC,” premiering Nov. 22, Ono said it contains footage even she hasn’t seen. “Yes, it seems like you know everything about us. I thought so too,” Ono said. Ono cooperated with the production and narrates the prologue. American Masters e.p. Susan Lacy said the doc features music and images never released in public, including home movies. (PBS photo, Jake Landis)

UPDATE: Here’s an interesting overview of Ono’s full press session, titled, “An hour with the calm-combative yo-yo that is Yoko Ono,” courtesy of Canada.com.