Before then, CPB had faced repeated struggles, including a rift between TV and radio. In 1981, Congress imposed a formula proposed by Rep. Tim Wirth (D-Colo.), then chair of the House telecommunications subcommittee. The 75-25 split between TV and radio was based on experience.

Robben Fleming, then president of CPB, complained that the formula “emasculates” CPB, and his successors periodically have objected to their loss of discretion over spending. Between 1996 and 2004, CPB attempted to evade the formula’s restrictions to undertake an ambitious R&D effort for public TV called the Future Fund and was reprimanded by a General Accounting Office report.

CPB also occasionally receives targeted funds not governed by the formula: the private Annenberg Foundation donations that supported the Annenberg/CPB projects, separate appropriations for Ready to Learn children’s programs, for station upgrades to digital TV and digital radio (HD Radio) technology, and for periodic overhauls of the TV and radio satellite systems. 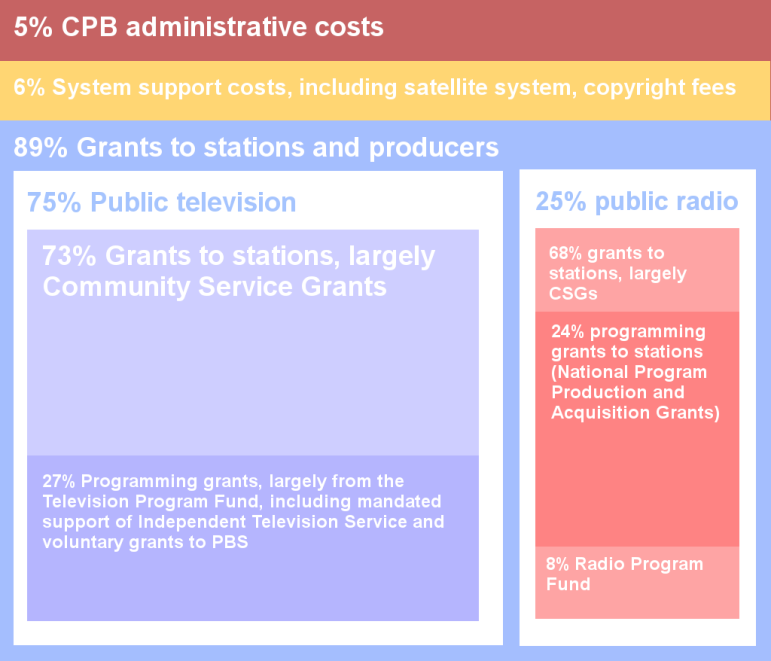 The result each year, though, maintains the major spending proportions.

The allocation formula as described officially in the Public Broadcasting Act

The following provisions are contained in this portion of Section 396 of federal communications law, which establishes CPB. Source: federal law as of Jan. 26, 1998, posted on the web site of the Cornell Law School Legal Information Institute. Below is a portion of U.S. Code 47, Chapter 5, Part IV, Subpart D, Section 396.