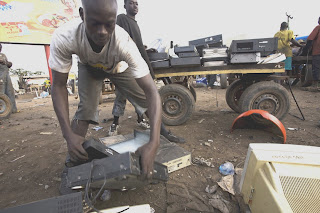 The Los Angeles Times said that PBS “flexed its usual strength” when the News and Documentary Emmy nods were announced today (July 15) and the network received 37. Frontline scored four and Frontline/World, three; Nova and P.O.V. each had four; and Bill Moyers Journal, which ended this year, received three. “Mosque at Morgantown,” one of the “America at a Crossroads” series funded by CPB, also is in the running. The 2010 lifetime achievement award goes to noted documentarian Frederick Wiseman, perhaps best known for his groundbreaking 1967 cinema verite “Titicut Follies.” Several of his 30 films ran on PBS, including “Domestic Violence” and “High School.” For a full list of Emmy nominations, visit the Academy of Television Arts and Sciences website (PDF).

UPDATE: Here’s an interesting Emmy factoid. The two nominations for the Frontline/World doc, “Ghana: Digital Dumping Ground” (at top, image: PBS) are a first for any Canadian university. Ten students from the University of British Columbia’s international reporting class worked on the film, reports the Vancouver Sun. Former 60 Minutes producer and UBC associate professor Peter Klein supervised the students as they traced the path of electronic waste — such as old computers and cellphones — around the globe. “There, buried among smoldering heaps of burning plastics and metals, they discovered health, human rights and national security concerns,” the paper said. The two nods are in the outstanding investigative journalism and outstanding research categories.