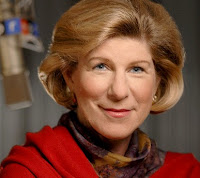 NPR legal affairs correspondent Nina Totenberg is the recipient of this year’s prestigious Edward R. Murrow Award, CPB announced today (July 8). CPB has presented the honor since 1977 to individuals who “foster public radio’s quality and service and shape its direction.” It’s named for the legendary newsman who championed high-quality journalism during his three-decade career. Totenberg has been with NPR for 35 years. Her reports air regularly on All Things Considered, Morning Edition, and Weekend Edition. And no doubt she’s the only Murrow Award winner with a carry-all named after her: The Nina Totin’ Bag. (“Due to extremely high demand … now in its second edition!” points out the online NPR shop.)