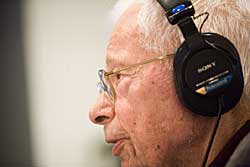 Veteran newsman Daniel Schorr, a pioneer of broadcast journalism who was part of Edward R. Murrow’s legendary CBS team, died this morning (July 23) after a short illness at the age of 93, NPR announced. Since 1985, Schorr was a senior news analyst on Weekend Edition and All Things Considered; his last segment was July 10. Scott Simon, host of Weekend Edition, said in a statement, “I was privileged to know Dan Schorr for 25 years and cherish him as a fierce journalist, and a tender friend and father. We used to joke, ‘I’m not Dan’s son. But I play Dan’s son on the radio.’ Sharing the studio with him, and so many laughs and memories, has been the blessing of a lifetime.”

Schorr’s news career began in 1946 as a foreign correspondent for Christian Science Monitor, then the New York Times. He first began working with NPR in the late 1970s. He help create CNN in 1979, and served as that network’s senior correspondent in Washington. He became senior news analyst for NPR in 1985.

Schorr earned many news awards including a Peabody for “a lifetime of uncompromising reporting of the highest integrity,” three Emmys and the duPont-Columbia Golden Baton. In 2002 he inducted into the Hall of Fame of the Society of Professional Journalists. His memoir, Staying Tuned: A Life in Journalism, was published in 2001, and Clearing the Air, an account of his experiences at CBS, hit bookstores in 1977.

In a 2001 interview with Current, Schorr recalled an infamous moment in his broadcast career. In 1973, during Watergate, he was on the air reading President Nixon’s “Enemies List.” Suddenly, he came to his own name at No. 17. He simply kept reading. “But every now and then I’m sort of retrospectively alarmed. I think, jeez, what do you think he would have done?,” he told Current. “It is true that for the first and only time in my life, my income tax was audited that year. The Treasury denies there was any connection, but it’s a big, big coincidence.”

“Dan was around for both the Russian Revolution and the Digital Revolution,” Simon said. “Nobody else in broadcast journalism – or perhaps any field – had as much experience and wisdom. I am just glad that, after being known for so many years as a tough and uncompromising journalist, NPR listeners also got to know the Dan Schorr that was playful, funny and kind.” (Image: Stephen Voss for NPR)