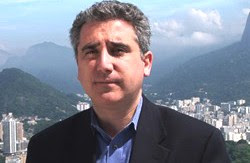 Simon Marks has been named president of MacNeil Lehrer Productions, according to a statement from the program. He’s currently associate executive producer at the production company’s signature show, PBS NewsHour. Marks oversees daily production of the NewsHour broadcast and digital news. He also helped develop and spearheaded the recent integration of the show’s broadcast and online operations (Current, Jan. 11, 2010). He has produced and reported for the program since 1994. He replaces Lester Crystal, who is retiring. Marks assumes his duties on Sept. 1. (Image: NewsHour)