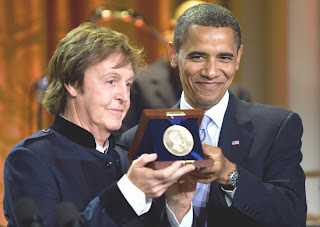 The Washington Post‘s Reliable Sources columnists are reporting that a cutting remark rocker Paul McCartney made during the taping of a PBS “In Performance at the White House” concert was omitted from the program. His comment came near the end of the June 2 performance, after he received his Library of Congress Gershwin Prize for Popular Song from President Obama (above, PBS image). After one more song, McCartney told the crowd, “After the last eight years, it’s good to have a president that knows what a library is.” The Huffington Post said a rep for producing station WETA explained that McCartney’s comment came after the program had officially concluded. “Celebrating the Music of Paul McCartney” airs July 28.