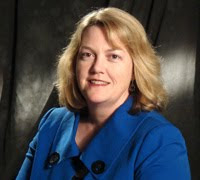 Vermont Public Television has hired Kathryn A. Scott as its chief content officer, the Burlington Free-Press reports. “I am doing my level best to stimulate the local economy through the purchase of a new car and some new appliances,” Scott quipped. She produced American Public Media’s Weekend America from 2005 to ’07, and Sound Money from ’02 to ’05. In the 1990s she was series producer for Newton’s Apple on PBS. She’s also produced news and docs for USA Today on TV, Discovery and Tech TV News. (Image: VPT)