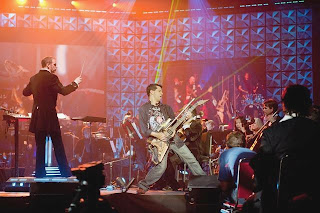 The video gaming community is going bonkers in anticipation of a PBS special airing July 31 and through August. And it’s no wonder: According to the Video Games Live website, the 90-minute orchestral performance includes “never before televised live musical performances from the Mario, Zelda, Sonic, Halo, Warcraft, Final Fantasy, Castlevania, God of War, Civilization, Chrono Cross, StarCraft and Guitar Hero franchises, including a musical journey through Classic Gaming.” It describes the show as an “immersive concert event” featuring music from the video games along with “synchronized lighting, solo performers, electronic percussionists, live action and unique interactive segments to create an explosive entertainment experience!” It adds that the event is put on by the video game industry “to help encourage and support the culture and art that video games have become.” The Louisiana Philharmonic Orchestra does the honors for this concert (above), filmed in February in New Orleans. Watch the PBS trailer here. Will this bring in a younger audience? Well, as one comment post on the trailer says, “omg, i love pbs now.”