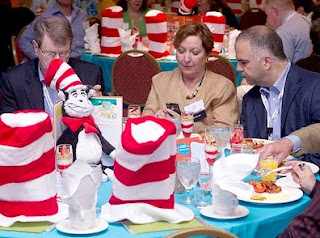 The PBS Annual Meeting in Austin earlier this month may be over, but it continues to generate vital news: KQED is announcing winners of its Seussical Twitter rhyming contest that took place at the breakfast launch for The Cat in the Hat Knows a Lot About That (KQED image above, dig those striped parfaits!). The grand prize, a complete, 40-plus volume set of Dr. Seuss books, went to Mary Ann Dillon, Ready to Learn coordinator at PBS Eight/KAET in Phoenix. Her Tweet:

Runners-up, who received books from “The Cat in the Hat’s Learning Library,” didn’t quite hit the anapestic tetrameter rhythm exactly but managed to have fun. Here’s a ditty from an obviously annoyed Holly Emig, program schedule manager of the Oklahoma Educational Television Authority:

But our favorite may just be this one from David Lowe, g.m. at KVIE in Sacramento, who diverted from writing about the new PBS show to focus on more pressing matters:

The Austin Hilton didn’t hold
My board chair’s reservation.
Thankfully it wasn’t my fault
Or I’d have no job preservation.

Yovel Schwartz, Cat in the Hat project supervisor at KQED, told Current that the contest actually was announced in advance via several Twitter feeds and internal PBS sites and newsletters. The competition ran for nearly three weeks but most participation was at the breakfast, which was attended by around 800 persons. “Three of our winners were just regular moms that were following the PBS Parents Twitter feed when the contest was announced and decided to participate,” Schwartz noted.