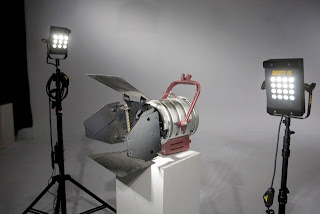 WKYU in Bowling Green, Ky., said in a statement today that it is the first PBS affiliate in the country to use a revolutionary light emitting diode (LED) lighting system, which will reduce energy consumption by 97 percent. The equipment is so new — manufacturing began in 2009 — that one commercial station is the only other TV facility using it. WKYU’s old lights were around 40 years old and “regularly malfunctioned,” according to the station. Those were incandescent tungsten, manufactured in the 1960s and ’70s, with specialized bulbs expensive to replace. “The control panel looked like a huge old telephone switchboard, with knobs on retractable cords that plugged into a patch panel above,” the station noted. The total rebuild included a new lighting grid, all new electrical cabling, and computerized lighting control system for $150,000, funded by licensee Western Kentucky University. Above, all 60 of the new LED lights use less power than two of the incandescent lights at the center. (Image: Clinton Lewis, WKYU)