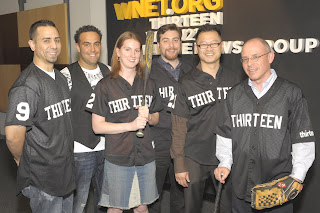 ThirTeam, the aptly named softball team from Thirteen/WNET.org, is on a roll, reveling in three consecutive wins — 13-6, 15-8, 9-8. The players are current and former employees of the New York City station. “It’s allowed us to stay connected with each other,” said Joe Basile, director of program rights and clearances, who has been playing for ThirTeam since it formed in 2004. A few team members and their departments, from left: Manny Santiago, network technologies; Austin Traina, tech support; Christine O’Brien, schedule operations; Ryan DeWitt, research; Dean Li, local corporate marketing; and Basile. (Image: WNET.org)