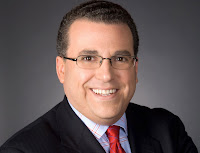 Longtime ABC News Political Director David Chalian joins the PBS NewsHour on July 6, the show announced today. As its political editor, Chalian will direct the NewsHour’s political coverage across all platforms and manage the editorial content from the NewsHour’s congressional, White House, and Supreme Court beats. He will also serve as an on-camera political analyst and will appear in regular political webcasts on the Online NewsHour, as well as develop original digital political content.