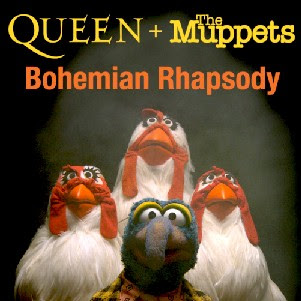 Muppets Studio won four Webby Awards — a major coup for its hilarious “Queen and the Muppets: Bohemian Rhapsody” — NPR.org won two, and one each for PBS, Frontline/World and Sesame Street in the honors for online excellence announced today. (OK, so technically Muppets Studio isn’t really a pubcaster, but those furry ones are definitely related to their Sesame Street cousins so we’ll claim ’em.) Each category had two winners, one voted on by judges including domestic doyenne Martha Stewart, Simpsons creator Matt Groening, and media maven Arianna Huffington, and the other, People’s Voice, selected by voters around the world. NPR’s awards came for Best Practices (People’s Voice) and Radio Podcasts (People’s Voice). “Bohemian Rhapsody” was a dual winner in the Music and Viral categories, taking both a Webby and a People’s Voice (the behind-the-scenes video of its creation is pretty fun, too). The Frontline/World site won a People’s Voice in News and Politics Series for its Carbon Watch, and PBS in the Youth Website category for its PBS Kids. Sesame Street scored a Website Webby for Family and Parenting. Nearly 10,000 entries from all 50 states and more than 60 countries were considered. The Webby Awards have been presented since 1996 by the International Academy of Digital Arts and Sciences. Here are full lists of website winners, honors for interactive advertising, the list for online film and video, and mobile. Webbys will be presented June 14 in New York City.