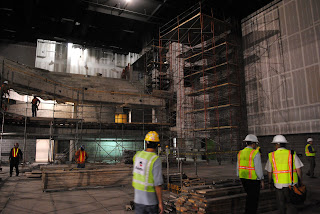 Pubcasters including WNET President Neil Shapiro and Malcolm Brett, PBS Board member and director of broadcasting and media innovations for Wisconsin Public Television, donned hardhats and jaunty reflector vests for a May 19 tour of the spiffy new Austin City Limits theater construction in Austin (background, Current, July 20, 2009). Leading the group through the maze of building material was Bill Stotesbery, g.m. of KLRU. It’s part of a $300 million downtown redevelopment just across from city hall. The 2,500-seat venue is on schedule for a December opening, and funding work is going well. Above, that’s the stage to the right and seating to the left.
ShareTweet EmailPrint More