As politicians and forecasters glimpse the prospect of economic rebound, the recession’s damages are mounting for public broadcasters.

The University of Michigan said last week that it plans to hand off the operation of its pubTV station in Flint, and a Pennsylvania official warned that two small TV stations in the commonwealth could follow. 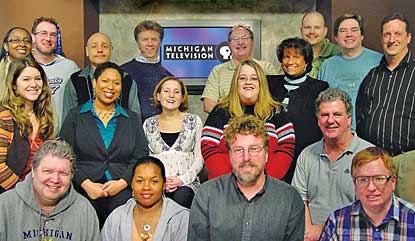 Many WFUM staffers are likely to be job-hunting this summer as the University of Michigan seeks another organization to run it. “If dedication to mission and staff commitment were the measure by which stations were funded,” Station Manager Jennifer White wrote, “Michigan Television would be well funded indeed.” (Photo: WFUM)

Miami’s publicTV station meanwhile announced 23 layoffs and Philadelphia’s largest cut its staff by 17. NPR said it will cut 13 more jobs, while its employees ratified two union contracts that authorized a package of cost-cutting measures, including furloughs and a suspension of company contributions to health and retirement benefits.

The station marked for closing is Flint’s WFUM, [which the university said was] one of the 30 economically “fragile” public TV stations identified in a survey presented to the CPB Board in January.

The station’s licensee, the University of Michigan, said April 23 that it expects to arrange for another licensee to take over operations this summer. The station serves a weekly audience of about 200,000 in an area with 14 percent unemployment. Some or all of 21 station employees will lose their jobs.

“We have been grateful for the support of our viewers and donors and the dedication of our staff, but unfortunately WFUM-TV has not been able to sustain itself financially, like many other businesses in this tough economy,” said David Lampe, the school’s v.p. of communications, who oversees Michigan Public Media and recommended the cut to a regents’ committee April 16.

Last fiscal year, station operations cost $4.2 million, but revenues covered just two-thirds of that, falling short by $1.48 million. The station has exhausted its reserves, and two of its major revenue lines, membership and underwriting, have dropped 28 percent from last year’s level, the administration said. WFUM’s auditor, PricewaterhouseCoopers, said in February that the station was unlikely to survive, according to the school.

This didn’t sit well with the Board of Regents, which expects broadcast stations, like athletics teams and university hospitals, to be largely self-supporting, Lampe said.

The university is talking privately with two other public broadcasters that might be interested in using the license, he said.

Lampe declined to say whether the university will ask to be paid for transferring the license. “We’re not going into it with preconceptions,” he said. “We’re going to see what the opportunities are. We know [the license] has a value.”

Lampe became the overseer of Michigan Public Media, including the larger three-station Michigan Radio network, in July. The radio network, based at WUOM in Ann Arbor, is not affected by the cutback. Michigan Radio announced last week that its weekly cume audience reached a record level of 513,600 listeners last fall.

WFUM — founded almost 29 years ago at the University of Michigan–Flint — has enjoyed distinctions of its own. Last year it won nine regional Emmys in the Michigan competition, according to the Flint Journal.

But the pubTV station has been losing money since 2005, and the Board of Regents assigned Lampe, working with Steve Schram, head of Michigan Public Media, to consider what to do with WFUM.

At the same time, the state has been cutting higher-ed appropriations for years and is moving toward cutting more than $40 million for next year. The university in turn is reducing spending on its university press, hospitals and computer services as well as on WFUM.

PPTN Chair Tony May warned at a state Senate hearing April 22 that cutting state aid to PPTN “would have a severe, if not fatal, effect on our two smallest stations.” WYBE, the smaller of the two stations in Philadelphia, and WQLN in Erie count on state funding for more than 30 percent of their budgets, he said. “There certainly are alternatives to going dark, but none of them are very palatable,” May said.

Repercussions of the recession also reached Miami, which pink-slipped 23 of its 150 employees April 20, noting that its revenue for the past nine months was down 20 percent from the same period last year. Philadelphia’s major public broadcaster, WHYY-FM/TV, said April 22 it would lay off 17 staffers, or 8 percent of its staff.

Spokesman Art Ellis told the Philadelphia Inquirer that “no one directly involved in news or content production” was dismissed.

The Inquirer noted pointedly that WHYY President Bill Marrazzo’s potential $740,090 in salary, benefits, expenses and deferred compensation in fiscal year 2007 equaled 62 percent of the amount saved by the layoffs. Union leaders have complained about Marrazzo’s pay as well.

The Inquirer reported that Danny Miller, e.p. of the station’s most successful national production, Fresh Air, asked Marrazzo whether management had considered cutting executive salaries (with Miller counting himself in that category). Marrazzo said that was not an option, according to the newspaper’s sources.

The next day Marrazzo told colleagues “that he has made several voluntary gestures . . . that have reduced his compensation materially,” according to Ellis.

Layoffs were also announced earlier this month at New Hampshire Public Television. Five employees were cut, and four vacant positions will not be filled.

“We tried in every way we could to reduce expenditures in other areas,” spokeswoman Grace Lessner told Foster’s Daily Democrat, a Dover, N.H., newspaper. “It’s a very unhappy thing to let people go.”