A public broadcaster removed unexpectedly from the board of Catholic Church–controlled KMBH public radio and TV in Harlingen, Texas, is heading an effort to create an independent public radio station in the Rio Grande Valley.

Betsy Price of Brownsville and 30 other volunteers call themselves Voices from the Valley. Their goal is to provide more local and NPR programming than KMBH currently carries.

The group’s forthcoming announcement of its board members may coincide with more news about KMBH, the region’s only pubcaster: CPB’s inspector general is completing a review of its compliance with grant rules and examining station financial documents related to CPB.

The inspectors are likely to find an operation that, like a significant minority of public stations, is in “fragile” fiscal condition. In February, a CPB-commissioned report applied that adjective to 18 percent of pubTV stations.

The valley’s station, with a budget of just under $2 million, has run growing deficits for four years — last year’s was $666,000 — and has kept itself afloat with loans totaling $1 million.

The CPB investigation stems from stories in Harlingen’s Valley Morning Star about ongoing controversies at KMBH, including its lack of transparency about station financial documents, the licensee’s controversial dismissal of Price and two other board members, and its longtime lack of a community advisory board — a required fixture for CPB grantees.

Voices from the Valley has been “quietly looking for a large donor, but now we are going to start our ‘noisy’ campaign,” Price told Current. “We were not quite ready for this stage,” she added, but the investigation of KMBH “made us move up our action plan.”

KMBH-TV, KMBH-FM and KHID-FM are owned and run by RGV Educational Broadcasting, a nonprofit created by the Roman Catholic Diocese of Brownsville. The station’s president and g.m. is Msgr. Pedro Briseño, pastor of Immaculate Heart of Mary Parish in Harlingen.

Briseño told Current via e-mail that he did so because the station was making a “good faith effort” to comply with the CAB requirement, which was his reading of the FCC requirement.

Section 396(k)(8) of the Communications Act says federal money may not go to a station “unless such station establishes a community advisory board.” The “good faith effort” mentioned in the Act refers to a station’s attempt to ensure that the board meets at set intervals, that its members attend regularly and that the board’s diversity reflects the community.

A representative of the IG’s office said its report would be posted on CPB’s website within the next month.

Since Gillette’s visit, KMBH has assembled two community advisory boards—one for the Lower Valley and another for the Upper. “Each board has a founding group of about 10 individuals,” Briseño said. Both held their first meetings last week. Briseño said he is awaiting details of what was discussed.

On the last day of his stay, Briseño said, Gillette said he had found no wrongdoing or unexplained transactions in the execution of the CPB grants.

“He advanced some suggestions on how to improve our bookkeeping,” Briseño added.

“. . . He also made some suggestions on how to make our public inspection files more available to the public through [the] Internet.”

Briseño said he has “no idea” what the final outcome of the review will be. IG Kenneth Konz said his office doesn’t comment on ongoing investigations.

A mess in Texas

It’s yet another chapter in a continuing controversy in the neighboring border cities of Harlingen, Brownsville and McAllen:

“The Bishop or Administrator of the Diocese of Brownsville,” currently Peña, is listed as the sole member of the nonprofit RGV Educational Broadcasting in its incorporation documents. Thus, as current bishop, Peña may appoint or dismiss board members at his discretion, Briseño explained.

RGV Educational’s bylaws say: “A director may be removed at any time by the membership for cause. The membership shall cause immediate written notice of removal to be delivered to the director or directors and to the secretary of the corporation … “ 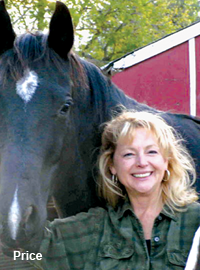 One of the members who was asked to leave, Price, had been on the board for five months. She said she was puzzled as to why she was thanked for her service and told her work there was done.

Texas law permits a single “member” to have full control over board appointments, according to University of Houston Law Center Prof. Johnny Rex Buckles, who teaches both nonprofit and theological law. “I think that probably in this case the bishop can do just about what he wants.” State law also allows nonprofit directors to be let go without cause, Buckles added.

Bishop Peña gave no reason for the board dismissals in a response to an inquiry by Current, but issued this statement: “I value the dedicated service of all members who serve and have served on the board. The diversity and knowledge of our members, past and present, have contributed to the growth of the station and the programming it offers. By their nature boards fluctuate in their makeup and composition. The balance of continuity and new provides for the healthy energy in an organization.”

Price speculated that the bishop may have dismissed the three board members because they “were working very hard to get more transparency at the station.”

KMBH first posted audited financial statements on its website in 2007. Price said the three board members requested to see detailed past financial reports to approve a budget for the upcoming year. “We wanted the complete auditor’s reports with his or her suggestions, and a detailed budget for the upcoming year that justified the expenses and potential income. And enough time to review and discuss them before approval.”

Records on the station’s website indicate that it was headed for its third running year of deficits in fiscal year 2007 when it borrowed $700,000 from Chase Bank and $300,000 from the Brownsville diocese.

Briseño said the loans covered unexpected costs in refitting the station for DTV. A California firm hired to do the work in 2007 went bankrupt and, according to Briseño, would not refund the station’s payments.

“With or without CPB grants, we still needed to get some loan money to be able to make our DTV master control fully operational,” he said, adding that the station expects to pay off both loans within five years, with an option of extending payment to 10 years.

‘Getting ready to roll’

Price volunteered at KMBH for three years before landing on the board. Before moving to Texas, she worked for more than 20 years as a nonprofit fundraiser and public radio producer, active at two NPR member stations and a community station in Salt Lake City.

Price is pleased with the progress her group is making in launching a new public radio station. “We’re getting ready to roll,” she said.

The new station will emphasize “representing the valley,” she said. “We have a lot of growing nonprofits that rely on public radio to convey their message.” Price hopes the station can provide nonprofits a free venue to publicize events and services.

Price wants the new station to run “at least two hours a day of local programming, produced here—we have a lot of talented people here in town.”

“We want programming that reflects the past and emerging new culture of the community,” she added. “By not picking and choosing what people want to listen to, [KMBH] is losing a lot of them.”

The first NPR show she’d like to buy is Science Friday. Both colleges in the area, University of Texas Brownsville and UT-Pan American, have large science programs. Younger students also enjoy the subject.

“Science Friday is something both parents and children can listen to, and teachers can use,” she said.

KMBH-FM and its repeater KHID do not run Science Friday, or much other NPR programming apart from Morning Edition and All Things Considered. Briseño characterized the station’s programming as a combination of symphonic music and news and talk shows “of interest for the Catholic community.”

Music programs include Performance Today, The Thistle & Shamrock and Putumayo World Music Hour. The Nuevo Tejano Conjunto Show is provided by a nonprofit that promotes the regional music. Texas Matters is a public-affairs production of Texas Public Radio in San Antonio.

Price realized that creating a new station to offer more local and NPR programming was daunting. She reached out to San Antonio’s Texas Public Radio, the closest sizeable pubradio station, for advice.

News Director David Davies confirmed that station reps have talked with Price in recent months. One potential role for the San Antonio station, Davies said, would be to supply Price’s group with programming “and use the infrastructure we already have in place to provide services.”

Price admitted that it would be easier to create a community radio station with more volunteer programming. “That would have been more logical because we’re starting from scratch,” she said. “But because of Texas Public Radio, we’re halfway there.” TPR could own the license, and Voices could use its resources to broadcast.

Price said the group has identified a few channels in the area for sale and is closely watching several Clear Channel-owned stations that are re-evaluating their financial situations.

Briseño doubts the Valley could afford another station. KMBH’s 12 years on the air “have demonstrated that the public of the Valley is ready to support just one public radio station,” he said. “Demographic, cultural and economic analysis fully supports this assertion.”

Besides, the area is saturated with FM signals from both U.S. and Mexican stations, he pointed out.

Price said the volunteers “have identified large donors and have been very quietly working on a strategy to get them interested.”

Briseño said he didn’t want to comment on the possibility of a second area station until he sees what programming it will offer.

He added, “I still don’t know what Voices from the Valley is besides a vague idea in the mind of a former board member [of] our corporation.”