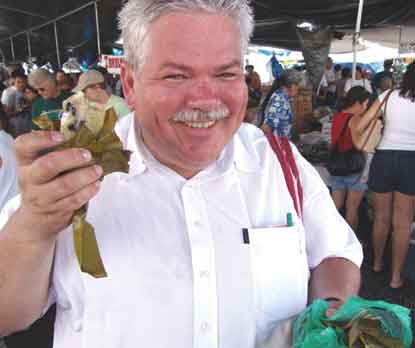 ‘If I had to choose one genre to do for the rest of my life, I would do road shows,” says Pittsburgh documentary maker Rick Sebak. His 10th national show for PBS, To Market to Market to Buy a Fat Pig, premiered last month and took him to markets in eight cities.

The WQED producer has dabbled in travelogues before with The Pennsylvania Road Show in 1992 and the national A Program About Unusual Buildings and Other Roadside Stuff in 2004.

Right now, he’s rolling across the country — in a boldly trademarked WQED minivan — to make a doc tentatively titled A Ride Along the Lincoln Highway about the country’s first transcontinental route, which snakes from Times Square past the Great Lakes to the Golden Gate.

Sebak’s “get-acquainted tour,” as he calls it, is collecting the first footage for the show, planned for the PBS schedule in summer or fall 2008. Gleaning from posts on Sebak’s travel blog Lincoln Highway Postcards, the project looks to be another exercise in what Sebak calls “celebrating” culture that’s rarely seen on commercial TV.

In his Sept. 4 post, Sebak, cameraman Bob Lubomski and multifaceted tech guy Jarrett Buba have stopped for the night in Ely, Nev., at a one-story motel called The Jailhouse. Sebak wanders across the street to the Hotel Nevada:

“The Hotel Nevada is a place with very interesting energy,” he blogs. “Built in 1929, it was then the tallest building in Nevada at six stories. It was the place where the young Wayne Newton got his start, and it’s got a goofy little walk of fame out front.” The cluttered old joint has slot machines, he says, but no Vegas slickness. “It’s sort of homespun. It feels like a small town version of a gambling den.”

The hotel’s qualities—goofy, cluttered and homespun—also describe Sebak’s films. His programs cover culture for its own sake, not to launch a political issue or pick up on a current affair, and people love them. (Current, Oct. 3, 1994) They’re part of a small pubTV niche, a genre of “regular people” documentaries by Mark Lewis, Andrew Kolker and Louis Alvarez, where the talking heads seldom talk about anything of mainstream political importance. Sebak’s shows, perhaps more than any other, lack the usual overt public-affairs flavor of PBS docs.

“We love celebrating the fact that it’s not a totally homogenous country . . . yet,” he says. “We love to point out the things that make us still a little bit different. It does matter where you live—every place is not the same.”

Something universal in the local

Since the late ’80s, when his WQED show about Pittsburgh’s beloved Kennywood amusement park became a pubTV favorite far beyond the city, Sebak—who started making docs at South Carolina ETV—has authored meditations on such everyday things as hot dogs, diners and cemeteries. His local and national shows trade in the humor and back stories you hear only on the street. They go down easy and repeatedly. With A Hot Dog Program, programmers find an audience again and again.

The ’Burgh treasures its history of industrial might, immigrants and neighborhoods. Rob Owen, TV critic at the Pittsburgh Post-Gazette, says the city and Sebak are suited for each other. “Certainly Pittsburgh is rich in people—people from all walks of life,” says Owen. “There is a quirkiness factor, and [Sebak] is more than happy to embrace that.”

“I think he would be considered a local celebrity of sorts,” says Owen. “Kind of like the fun uncle who tells you a story once or twice a year at a family get-together.” Four years ago, as Owen reported at the time, a Pittsburgh developer gave Sebak’s name to a short street in the Squirrel Hill neighborhood.

Sebak’s work—a mix of factual tidbits and individuals’ experiences—cultivates a desire to experience the less-traveled places, says Larry Bird, curator at the Smithsonian’s National Museum of American History. “In what he seeks out, there’s a conscious desire to showcase, or highlight or celebrate, a parallel universe,” he says.
To Market to Market isn’t about supermarkets, Bird says. It’s about places that don’t fit into a big-box, cookie-cutter commercial market. Sometimes, says Bird, it’s “like being let in on a big cultural secret.”

Their own bit of expertise

“You know, everybody likes fresh food,” Sebak says at the beginning of To Market (over whimsical piano music). He admits the tour ahead couldn’t possibly be comprehensive: “Of course, we may not get to your favorite,” he says, “but we know it’s probably a great one, too.”

Documenting the lives of “everyday people” can be tricky, particularly without the parameters of a political issue. It can appear to mock its subjects or smother them with preciousness. “When you’re talking to people, you’re inevitably in a situation where you can very easily take advantage of them,” says filmmaker Andy Kolker, whose most recent project with Louis Alvarez and Peter Odabashian, The Anti-Americans, aired last month on PBS. “They’re vulnerable to you—we used to call it stealing souls. You have to really be careful about it. With Rick, he just has a very familiar touch. Obviously, people take to him very easily.”

“He likes to have fun with people,” says Owen. “I wouldn’t say it’s necessarily at their expense, it’s just that sometimes people say funny things, and instead of shying away from that, he embraces it.”

Sebak’s style—less “scrapbook” than it used to be—more or less lets him off the hook. His films don’t seem to be overly planned or edited. Regular people in markets, restaurants and cemeteries speak up and appear to move the story along. The camera seems to happen on delightful scenes by chance.
In To Market, a vendor at the Lancaster (Pa.) Central Market explains why there’s no need for her to call her product “noodle soup.” Folks in Dutch Country understand there are noodles in everything. This is the kind of color Sebak goes for.

“We like to find subjects where everybody feels they have a little bit of expertise,” he says. “In the market show, for instance, there are a couple of women who are picking live crabs in Baltimore. They were just there, and I love that—they’re putting on a little bit of a show, but they’re also very real.”

He chooses topics that let him talk with a wide sampling of humanity, he says. Food is a favorite, but pizza would be too narrow. “It could be a good show, but it’s awfully Italian, and it’s sort of Northeastern. I want to find something that’s bigger . . . to get various points of view. And I think the truth is, if you’re dealing with America, and you have geographic diversity, you’re going to get all kinds of diversity.”

This is a TV program, not a film

Sebak has a symbiotic thing going on with PBS. “I know that we profit, when we go someplace we’ve never been before, simply by being public television,” he says. “All those studies where people perceive us as being good and worthy—we feel that when we go out to do a story.”

He also has sparse competition on a network that tends toward earnestness. “Traditionally public affairs programs have just been what they are, and so when you try to do something a little bit different—shake things up a bit—it’s a difficult row to hoe,” says Kolker, who sometimes hoes a row just north of Sebak’s. “I think that’s why you don’t see more of it.”

Certainly shows like Sebak’s are even less common on networks and cable, says Rob Owen. “[His work] has a humanist element to it that I think is largely and too often absent from what else we see on TV,” says Owen.

“The thing that’s nice about Rick’s shows is they really are a mix of entertainment and education,” he says. “Whether it’s true and deserved or not . . . there’s certainly a reputation of PBS being stuffy and not a lot of fun. Rick’s shows prove that . . . isn’t always the case. If there are opportunities to disprove the prevailing myth more, that can only be a good thing for PBS as a whole.”

Sebak’s programs may have an inimitable voice, but he doesn’t want them to be about him. “If you watch the Food Network or the Travel Channel—their things are all personality-driven, they’re host-driven,” says Sebak. “We want . . . people who normally aren’t on television—to give them a chance to talk.”

This may sound like a idealistic or even self-important artistic goal, but Sebak, with his wry sensibility, avoids being pretentious. “I seldom call them films,” he says. “I like to call them TV shows, TV programs, documentaries. It’s not a film, it’s a video.”

On the seedling mile

In pursuit of Lincoln Highway material in Grand Island, Neb., Sebak and crew pull into Kensinger’s Service Station, with a big sign that simply says GAS, Sebak reports in his blog.

Sebak is interested in the station because behind it lies an overgrown remnant of the original 1913 seedling mile—a stretch built by concrete companies to show the advantages of pavement. He talks with the owner, Dick Grudzinski.

“We convinced him to stay open for a quick five-minute interview, then a few extra shots of him in the station, and he was great,” writes Sebak. “He has a white cat named Cat who lives in the office, and Bob loved her, and we came to understand better how unusual it is for an independent full-service gas station to still be around, especially when the state government has blocked a lot of his business by ‘improving’ Route 30, making it difficult (impossible?) for eastbound traffic to turn into his station.

“We sympathized and wished him luck. He wished us luck, too.”