Piano Jazz hits its silver anniversary in April, a landmark that surprises nobody more than venerated host and pianist Marian McPartland.

“It’s kind of amazing that we’ve managed to be on the air for 25 years and no end in sight,” she says with a laugh. “I sort of envisioned doing it for a few months, or at the most a year. It never occurred to me that people would like it as much as they do.” 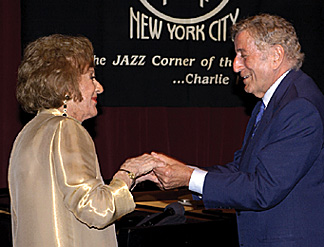 McPartland’s warmth and musical prowess draw big-name guests to her show, including her birthday special, on which Tony Bennett crooned. (Photo: R.J. Capak.)

Today it ranks among public radio’s most popular music programs, airing on 241 stations and reaching almost 400,000 listeners a week. McPartland, 85, who has hosted the show from its inception, started the gig at an age when most professionals are starting to daydream of sunny retirement homes. Her long service to jazz has attracted devoted listeners and, as guests, nearly every titan of the genre.

The scope of McPartland’s legacy was clearly visible at that party. It featured not only jazz elders such as crooner Tony Bennett and pianist Billy Taylor, but also recent arrivals to the scene, including avant-garde trumpeter Dave Douglas and Norah Jones, the Grammy-winning young chanteuse.

Jones told an interviewer at Birdland she used to listen to tapes of Piano Jazz passed to her by her high school piano teacher.

Another Birdland guest, 28-year-old pianist Jason Moran, started listening to Piano Jazz as a teenager at the urgings of a band teacher. Since the Birdland party he has joined McPartland at another public concert.

“She’s a woman who can really do anything you come at her with, which is great,” he says. “That’s the kind of musician you want to play with.”

Recent Piano Jazz shows have featured more young performers like Moran and have even reached beyond the jazz coterie to musicians such as Steely Dan and Elvis Costello. Yet McPartland’s admirers say she sets the show apart with her warm interviewing and her skillful improvising as accompanist to her guests.

“She has moved throughout the whole progression of jazz, and always kept an ear open,” says SCERN’s Shari Hutchinson, McPartland’s producer for 16 years.

Piano Jazz began in 1979 with some help from writer and composer Alec Wilder. A friend of McPartland’s, Wilder hosted American Popular Song, a 40-program radio series based on one of his books and distributed by NPR.

When the series ended, Wilder and Bill Hay, e.p. of the series and head of South Carolina ETV, conceived a piano jazz show with McPartland as host. McPartland said Wilder told her he had not pushed for her selection. “But years later somebody sent me a letter that he’d written recommending me,” she says in a phone interview from her Long Island home.

McPartland opted for a simple two-piano setup to avoid the hassle of assembling a larger band. With funding scarce, early shows were taped in a Baldwin piano showroom in New York. “There were always about 10 or 12 pianos in the showroom, so we would just pick out two we liked and pull them up side by side,” she says.

McPartland remembers she felt “like a kid in a candy store” as she invited favorite performers such as Taylor, Bill Evans and Oscar Peterson to appear as guests. Mary Lou Williams, a pianist and friend whom McPartland admired, was her first interviewee.

“She was really a bad choice for the first guest, because she’s kind of tough,” McPartland remembers. “It took a while for her to warm up, and being my first show I was a little on the nervous side, but it all worked out. She even sang a song, something I’d never heard her do.”

McPartland believes her interviewing skills have improved with time, but even early on she drew out guests with her open-ended questions and a sense of when to get out the way, an instinct that is key to good interviewing.

She modestly credits the show’s easygoing feel to the nature of performers. “It seems that musicians have a kind of rapport that, even if you haven’t met, you know the person, and you already have a friendship going,” she says.

McPartland strives to create intimacy, and indeed her show seems to make room on the piano bench for the listener. She rehearses minimally with guests before tapings that usually run an hour or two. It takes them only seconds to pick and launch into a tune.

McPartland works from a rough list of questions when interviewing but also lets conversations grow organically.

“I really am curious about the guests,” she says. “There’s always something that I don’t know even if it’s somebody that’s a really good friend of mine.”

She reacts with palpable feeling, telling one guest “I’m dying to hear you,” or capping a duet with, “Whee! That was very exhilarating.” Her background in jazz idioms, which ranges from Dixieland to her own compositions marked with modern harmonic complexity, equips her to join anyone with ease.

“She herself is extraordinary, in terms of her energy, her resilience, and of course her knowledge,” says Nat Hentoff, who writes about jazz for Jazz Times and The Wall Street Journal and has covered the genre for more than 50 years. Piano Jazz, he says, is “the best jazz interview show in the history of radio or television.”

Cosmetically, Piano Jazz has changed little over time, save for the huskier timbre McPartland’s voice has acquired with age. She also seems more at ease in conversation. The show is now taped at a small studio in midtown Manhattan, but Baldwins are still the grand pianos of choice. (The company also sponsors Piano Jazz.)

McPartland and her producer have tried to keep the show fresh by varying the lineup of guests. In the mid-’80s, Hutchinson says, Piano Jazz began featuring musicians who played instruments besides piano, with trumpeter and bebop trailblazer Dizzy Gillespie as the first such guest.

“My attitude has always been that Marian plays enough piano for it to be called Piano Jazz no matter what,” Hutchinson says, though about three-quarters of guests remain pianists.

Recent interviews include Costello, Walter Becker and Donald Fagen of Steely Dan, and young R&B singer and pianist Alicia Keys — musicians and jazz devotees better known for their command of other genres. Yet with McPartland, they performed in the jazz vein.

“That helps us track a different and a newer audience,” says Thurston Briscoe, p.d. at jazz station WBGO in Newark, N.J., which airs Piano Jazz. Hearing Keys talk about jazz persuades listeners unfamiliar with the music that “we’re not talking about ancient history here — we’re talking about music that stands the test of time,” he says.

Moore’s decision riles McPartland, who learned of it from an angry listener. “I think it’s extraordinary that somebody at a station would take it upon themselves to take out somebody because of their opinion,” she says. “They’re not giving me credit for knowing what I’m doing.”

“I think people who think that way are a bunch of old farts,” she adds. “They’re narrow-minded.”

For McPartland, interviews with younger performers often lead to friendships. She became close with Norah Jones since her appearance and had clipped an article about Keys from the New York Times last week. “I’ve got to give her a call,” she said.

With so many hallowed guests behind her, there are few performers she can regret missing. Legends Earl Hines and Count Basie, both penciled in on her calendar, took sick and died before joining her. She rues never interviewing Duke Ellington, but did get his son.

Today she angles for Keith Jarrett — he doesn’t sit for interviews but “I haven’t given up,” she says — and Stevie Wonder.

“He probably doesn’t know I exist,” she says, implausibly, then corrects herself. “Oh, yes, I’m sure he does, actually. But he’s so into his own life, and surrounded by a big entourage. I probably would have to have all of them on the show.”